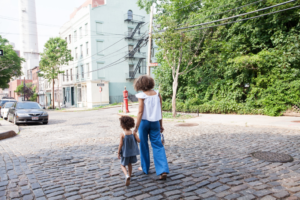 A primary narrative in family policy in the United States is that parents should have choices. The idea of choice fits neatly within the values central to the founding of the United States—freedom, independence, and individualism. These values assume that people should be responsible for themselves and should “pull themselves up by their bootstraps.” In this country we talk about family choice, healthcare choice, and school choice as code words for limited government involvement or small government conservatism, as solidified by Ronald Reagan in the 1980s regarding children. But, as Claire Cain Miller explains in the New York Times, mothers often feel they have no choice at all.

Women are still the primary childcare providers in heterosexual marriages. Three-quarters of mothers are employed, yet the structural problems mothers face are rarely discussed. Instead we talk about work-life balance, but this is not the right conversation. Without attention to the structural issues that mothers face, the choices are difficult ones. For example

The language of “choice” is misleading because it hides inequalities based on gender, race, and wealth. Miller explains that the concept dates back to the 1980s when women started entering the workforce in large numbers, which implied that women had the choice about whether to stay at home to raise families or to work. While white, married, middle-class women may have had some degree of choice, many women did not and had to work to support their families.

Miller notes that while more women than ever are in the workforce today, they still “feel forced to make painful decisions, like leaving their child in inadequate care, or working in scaled-back jobs they say they wouldn’t have chosen under different circumstances.” The language of individual choice still frames the public policy debate as women are told to “lean in or lean out.”

We need structural solutions. Democratic candidates propose structural solutions such as new federal programs, financed by taxpayers, that would provide paid family leave, subsidized daycare, and free public preschool. Republican proposals offer individual solutions such as letting new parents draw down their social security earnings to help pay for childcare or get tax credits. At this time, the choices women (and men) have for caring for families while working to support those families are very limited. You could say they don’t have choice at all.

Something needs to change.

We have heard a lot in recent months about sexual harassment and gender discrimination in the workplace, thanks to the #MeToo movement. But one form of gender discrimination we don’t hear a lot about is the deeply ingrained antimotherhood bias that takes a heavy toll on women’s pay and careers. Antimotherhood bias includes bias and discrimination against pregnant women, as reported by Natalie Kitroeff and Jessica Silver-Greenberg of the New York Times, who share a range of painful stories of women being fired or demoted for being pregnant. It also includes bias and discrimination against women once they have children, which is often casual, open, and unapologetic, according to Katherine Goldstein of the New York Times, even though this discriminations is illegal. This systemic bias is found in large corporations, such as Merck and Walmart, government organizations, and small businesses. Claire Cain Miller writes that antimother bias may account for most of the stubborn gender pay gap. Miller, Goldstein, Kitroeff, and Silver-Greenberg note these recent findings:

Why don’t women speak out about being passed over for promotions, visible assignments, and raises because of motherhood? Goldstein suggests that women may feel they have more to lose by speaking out. Women who are trying to have both a career and a family are pushing against negative judgment from both employers and society. They may internalize this judgment and feel guilty—and they have families to support and cannot risk being laid off or further penalized. Many lawsuits are working their way through the courts, and the Equal Employment Opportunity Commission has had more complaints filed in recent times than ever before about discrimination against working mothers, but we still don’t hear much about this issue. What will it take to bring about change? Miller points out that more women running for political office may mean that this issue gets addressed. For example, Senator Tammy Duckworth recently became the first United States senator to give birth while in office, and she subsequently fought for changes in accommodations and practices, such as availability of a lactation room, to support mothers in the Senate. Research has also shown some other policy changes that can help women who are mothers: Women may need to share their stories in a #MomsToo movement. What are your stories?   Photo courtesy of Ran Allen (CC BY 2.0)]]>

My sister and I took care of our mother during the last months of her life. She developed fast-growing brain tumors and, mercifully, was incapacitated and bedridden for only a few months before she passed away. We quickly became exhausted and unable to physically care for her without professional help as she declined. It was a shock to discover how expensive it is to hire home health support and how little the long-term care insurance, for which she had been paying over decades, would reimburse. None of us had the financial means to pay for much support for very long. She passed quickly, but a family can rapidly become financially drained trying to care for family members. Realistically, women pay the biggest price for both elder care and childcare—as unpaid family caregivers. Roni Caryn Rabin of the New York Times writes that, as our population ages, “the essential role that daughters play in the American healthcare system is well known but has received little attention.” Rabin notes that a crisis is emerging for women and their employers as the population ages and the number of dementia patients increases. Rabin cites a recent report in JAMA Neurology that states that, “by 2030, one in five Americans will be 65 or older, and the number of older Americans living with dementia is expected to increase to 8.5 million, up from 5.5 million now.” Rabin notes that while more men have gotten involved with some care giving for older adults, the burden is not shared equally and disproportionately falls on daughters and female spouses for care of parents and in-laws. What are the costs of unpaid care giving for women? Rabin reveals the following:

Liz O’Donnell, writing for the online journal Cogniscenti, offers this advice to daughters who are caregivers: In a previous article, I wrote about the negative impact on women’s employment levels due to care-giving responsibilities. We need comprehensive family support policies such as those available in Europe for affordable childcare, paid family leave and elder-care support. Family support policies are good for all of us and for our economy.   Photo courtesy of Chad Miller. CC by-sa 2.0  ]]>