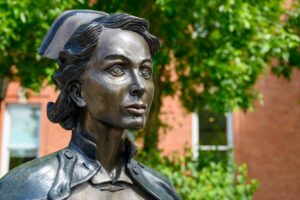 The Covid-19 pandemic has shown that “women’s work,” or the care economy, is essential work. In a recent article, I wrote about the essential infrastructure workers whose jobs were deemed too important to be halted in the pandemic but who are also usually underpaid, undervalued, and unseen. These roles are also overwhelmingly filled by women and, specifically, women of color. Lyric Thompson and Gawain Kripke of NBC News report that a growing number of policymakers in the United States are calling for a domestic “feminist response” to the pandemic. Representative Jackie Speier, D-CA, explains that a feminist policy response means “treating women as the essential workers they’ve always been” by providing

New research, reported by Thompson and Kripke, calls for a feminist foreign policy as well. This report shares a reason why female leaders appear to have more success in fighting the pandemic: the female leaders emphasize “empathy, human dignity and care rather than pitting the formal economy against the goal of saving lives.”

Thompson and Kripke note that the new research, based on a broad review of feminist policies in other countries, a global summit of government leaders, and consultation with activists in forty countries, refines the global picture into a tailored vision of what feminist foreign policy would look like. Here are the key points from their findings. A feminist foreign policy would

Having a domestic and foreign feminist policy approach is possible. Thompson and Kripke note that several other countries are in the process of implementing policies that require equal numbers of women and men in leadership positions and taking women’s rights issues into account in matters from trade to immigration to diplomatic engagement and aid programs. It’s possible in the United States too.

Photo by Graham Ruttan on Unsplash