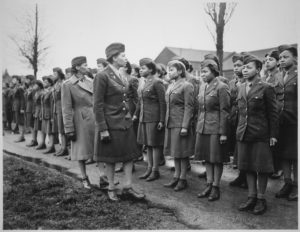 In this era of the murder of George Floyd and the attention his death has brought to structural racism in this country, the story of Lieutenant Colonel Charity Adams offers a glimpse into structural racism in the 1940s in the United States Army to remind us how far we have to go. Christina Brown Fisher, of the New York Times, notes that in 1942, the newly created Women’s Army Auxiliary Corp (WAAC, later shortened to WAC) accepted “40 black women into its first officer-candidate school.” Charity Adams, a twenty-three-year-old African American graduate student, decided to drop out of school to join the army and become the first black woman ever commissioned in the corps. She witnessed the active engagement of Jim Crow segregation in the army in many instances, including at her graduation from officer-candidate school when the candidates received their commissions in alphabetical order. Though her name was Adams, she should have gone first but all the white candidates crossed the stage before her name was called.

In 1945, Fisher writes that Adams was placed in command of a newly created battalion of 855 black women known as the 6888th Central Postal Directory Battalion. The posting of the 6888th to England during the war was an experiment resulting from “years of unyielding pressure from civil rights activist, including the first lady, Eleanor Roosevelt.” The War Department reluctantly agreed to trust a unit composed entirely of black women with an overseas posting and a monumental task. They were expected to fail, but instead, as Adams wrote in her memoir, the battalion Six Triple Eight proved to “be the best WAC unit ever sent into a foreign theater.” The Six Triple Eight was assigned the task of sorting a backlog in England of seventeen million letters and packages for American soldiers scattered across Europe. The battered troops needed to hear from home to maintain their morale. Adams was given six months to clear up the backlog, but the Six Triple Eight got the job done in three months.

Adams fought Jim Crow segregation in the army to protect her troops. She stood up to a general who tried to replace her with a white officer by telling him, “Over my dead body, sir.” He backed down. She stood up to the Red Cross, who tried to provide a segregated hotel for Six Triple Eight members on leave in London to prevent black service women from socializing with white soldiers. At the encouragement of Adams, nobody from the Six Triple Eight ever stayed at the separate hotel and stayed in only integrated hotels.

Fisher notes that despite enormous sacrifices during WWII by black soldiers overseas, it was not until 1948, after the war, that the military was officially desegregated. She points out that another two decades would go by before the Civil Rights Act and the Voting Rights Act were passed into law in the 1960s. It was five more decades before the Six Triple Eight received any formal recognition in 2019. Even when Adams died in 2002, she was initially denied an honor guard at her funeral by the army until a general from the air force stepped in to honor the first black woman ever to lead American troops overseas. Racism is not over in the military.

The story of Charity Adams is inspiring and frustrating all at the same time. The United States military is just one of the many institutions in this country where structural racism still exists and throws up roadblocks for black Americans and other Americans of color. We have to keep the pressure on for change in all our institutions to root out structural racism.