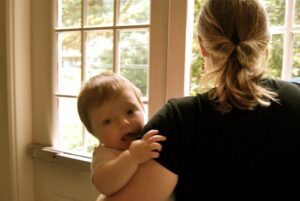 Much has been written about the lasting negative impact of the pandemic on women’s employment. In a previous post, I summarized several studies on the potential long-term impact of the pandemic on working mothers. Alisha Haridasani Gupta, writing for the New York Times, notes that “by February [2021], almost two million women had dropped out of the work force, bringing the female labor participation rate to its lowest level since the 1980s.” She goes on to note that the reason for the decreased participation was the increased caregiving burden on women due to the COVID-19 shutdown, when schools and childcare centers closed.

The sudden shift in childcare and eldercare burdens, which fell largely on women when the lockdown happened in spring 2020, changed the focus for many businesses from seeing childcare as a private matter to a business concern as they lost critical employees. Gupta writes that when Tina Tchen, the chief executive of Time’s Up, an advocacy organization, reached out to businesses to ask if they were interested in starting a new coalition called the Care Economy Business Council, almost two hundred small, medium, and large organizations became founding members with a focus on pushing for sweeping reforms to the caregiving infrastructure in the United States (). They note “that crumbling child and elder care systems ultimately affect business productivity and bottom lines.” The Care Economy Business Council released this groundbreaking statement:

This statement from the council represents a radical shift in perspective for the business community, which acknowledges that the care infrastructure problem is bigger than they can solve on their own and that the federal government needs to play a role. The council will both look for ways they can improve workplace policies and advocate for federally funded

There is bipartisan support in Washington, DC, for President Biden’s infrastructure bill, which includes investment in our national care infrastructure. It’s important to lend our support to this new proposed legislation. The health of our economy and the future careers of women depend on us.