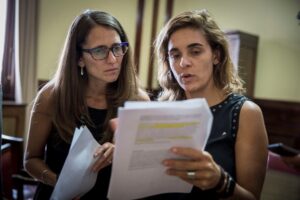 I was truly surprised to read about efforts by the president of Argentina, Alberto Fernández, to expand the rights of women in his country. Alisha Haridasani Gupta and Daniel Politi, writing for the New York Times, explain that President Fernández fulfilled a campaign promise by legalizing abortion at the end of 2020 and vows to “help mothers get back to work [after the pandemic] by building more preschools” and to fight against gender violence. Fernández deserves credit for putting the structures in place in his government to implement this feminist agenda, and he has put three strong feminists in charge of driving these changes:

These three leaders sprang into action when the COVID pandemic hit just after the new president was inaugurated in December 2019. In fact, the United Nations ranked Argentina number one for gender-sensitive COVID-19 responses in the world. Gómez Alcorta, Ibarra, and D’Alessandro explain that the gender-sensitive responses fall into four categories:

D’Alessandro explains that many gender-based problems still exist in the country. There are large gender gaps in the judiciary, trade unions, and the business sector, and the society is “still a male-dominated patriarchal, unequal structure with clear discrimination against women.” She goes on to state, “We’re not against men. All we want to do is take apart a system that has abused and hurt women.” I believe their attention to structural changes will help society for the better.