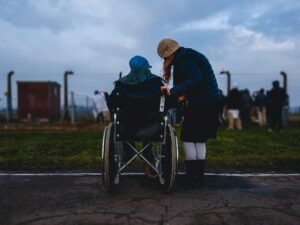 Once in a while, events in the country bring different interest groups into alignment to work together for structural change. It seems possible that the combination of the urgency of hardships families are experiencing wrought by the coronavirus pandemic, the election of Joe Biden and Kamala Harris, and the narrow Senate majority established by the election of two Georgia democrats will create that possibility. As I wrote in a previous post, citing Claire Cain Miller, “Nearly everybody cares for family at some point”:

New legislation proposed by the Biden-Harris team “approaches the care economy in a holistic way, across the age spectrum,” says Ai-jen Poo, executive director of the National Domestic Workers Alliance, in an article by Paula Span. Their plan combines Medicaid benefits for older and disabled adults, preschool funding for toddlers, and better pay and benefits for home-care and childcare workers into one package. Specifically, Span explains:

How will this caregiver package be paid for? Span notes that the Biden team asserts that the costs can be paid for over ten years “by rolling back tax breaks for real estate investors with incomes over $400,000 and increasing tax compliance for other high earners.” The Biden team also asserts that the plan will create three million new caregiving and education jobs and increase employment by five million by allowing unpaid caregivers to reenter the work force.

This kind of change is so needed but will not happen without strong support. Let’s let our congressmembers know that we support caregivers by writing and calling them to support this legislation when it comes up—and I believe that it will come up soon.

Photo by Josh Appel on Unsplash