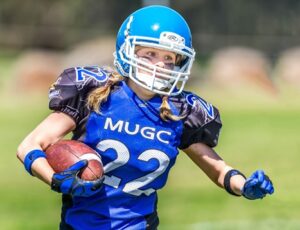 Title IX of the Education Amendment, signed into law in 1972, “forbade institutions receiving federal funds—virtually all public schools and universities—from discriminating on the basis of gender” in organized sports, as reported by Margaret Renkl in the New York Times. Practically speaking, this meant that schools had to provide equivalent resources for sports, but they did not have to let the women and men play on the same teams. This is why the story of Sarah Fuller is so significant. Fuller was invited to step onto the field for the Vanderbilt University football team, the Commodores, in November 2020. Fully suited up in pads and team jersey, she became the first woman to play in a Power 5 football game when she performed the second-half kickoff. Renkl notes that Fuller wore her own helmet emblazoned with the words “Play Like a Girl,” the slogan of a nonprofit that promotes sports and STEM opportunities for girls.

Thanks to Title IX, Fuller had the training, skills, and confidence to step in when the team, due to the coronavirus, was left without a kicker. The Vanderbilt women’s soccer team had just won the Southeastern Conference Division I championship with Fuller as a goalkeeper with a powerful kick—and the Commodores badly needed a kicker. She received a personal tweet from Hillary Clinton saying, “Thank you, Sarah, for helping to prove that women and girls belong on every playing field—quite literally.” Why shouldn’t women and girls be able to bring their talents to any and every field, not just those designated for women and girls?

In fact, so many opportunities in sports and elsewhere are defined as “for women” or “for men” when, in reality, the lines of sex, gender, and talent are blurred and beyond these binary categories. Talents are denied rather than celebrated based on criteria that are unfair and unproven. Jeré Longman of the New York Times writes about the uproar over who can compete in certain competitions in the Olympics. Based on sex testing that arbitrarily defines which chromosomes and hormones qualify someone to run a race as a woman, Longman cites Payoshni Mitra, an Indian scholar and athlete’s rights activist, as saying that the World Athletics organization is committing human rights violations by enforcing testosterone regulation on intersex athletes like Caster Semenya of South Africa and Annet Negesa of Uganda, both talented athletes who identify as women and who are not being allowed to compete unless they agree to undergo medical intervention. Longman notes that Human Rights Watch has deemed “medically unnecessary and humiliating” medical interventions as discriminatory and racially biased, disproportionately affecting women of color when there is no scientific consensus on the precise impact of testosterone on athletic performance.

Maybe it’s time to remove these artificial barriers of sex and gender and let all people bring their talents to whatever their field of endeavor is.

Photo by John Torcasio on Unsplash