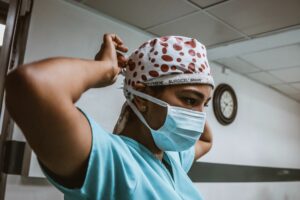 Adia Harvey Wingfield, professor of sociology at Washington University in Saint Louis writing for the Brookings Institute Gender Equality Series, shares a summary of her new research on ways the intersection of race and gender create uneven and divergent outcomes for women of color in a variety of professions. She has published new research in her book Flatlining: Race, Work, and Health Care in the New Economy. Here are some of the divergent outcomes that Wingfield discusses.

Pay gaps—Wingfield writes that “as a result of factors including, but not limited to, motherhood penalties, gender discrimination, and occupational segregation, women make 79 cents for every dollar men earn.” Wingfield goes on to note further divergence due to the intersections of race and gender for Black women who earn only 64 cents on the dollar and Latinas who earn 54 cents.

Stifled opportunities—Wingfield’s research confirms a challenge for women of color who cannot find mentors to help them advance in their careers because of race. She cites the research of sociologist Tsedale Melaku who reports that Black women in particular are more ambitious than white women but less likely to find mentors because of discomfort with Black people. When white executives do not have Black people in their personal or professional circles, they may be uncertain or uncomfortable interacting with them. Without senior white executives as mentors, Black women find it difficult to advance.

Doubts about competence and intelligence—Research has also shown that Latinas find that coworkers interact with them based on stereotypes that they are unintelligent or illegally in the country. Wingfield points out that these attitudes may account for the dearth of Latinas in leadership positions.

Being an only—When women of color do make it into high status jobs, they are often an “only”— the only person of color in the organization or at that level. It is not unusual for “onlies” to feel unsupported and exhausted by having to work extra hard to prove themselves.

Doctors—While Black women are 7 percent of the US population, they represent only 3 percent of medical doctors, “a disparity that has devastating consequences for health equity in a rapidly diversifying society,” notes Wingfield. For Black women doctors, Wingfield found that gender accounted for more microaggressions than race as “every Black woman doctor with whom I spoke shared accounts of being mistaken for a nurse rather than a doctor,” which was not a problem that Black men experienced. The extremely low number of Black women doctors also makes it difficult for them to find mentors.

Nurses—The challenges for Black nurses are not the same as for Black doctors. The Black nurses reported few instances of gender bias but dealt with frequent racist interactions with their white women colleagues and with patients.

Wingfield offers some solutions to the problems created by the intersection of race and gender in the workplace. She suggests organizations change hiring practices to pair with institutions known for training workers of color so they can increase the representation of groups of color. She also suggests they collect data to understand the challenges and obstacles faced by their employees of color and change aspects of their culture that allow sexual harassment to flourish.

Wingfield has shed light on how intersections of race and gender create problems that have a cost for all of us.

Photo by SJ Objio on Unsplash