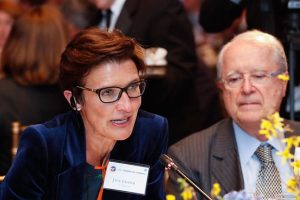 The deaths of George Floyd, Breonna Taylor, and Ahmaud Arbery, among other Black Americans killed by police or white citizens in 2020 and captured on video, triggered an outpouring of public support for the Black Lives Matter (BLM) movement in the summer of 2020. The obvious injustice of the killing of unarmed Black people like Floyd, Taylor, and Arbery, witnessed over and over again on the daily newscasts from the video recordings of their deaths, tipped the scales of outrage in the American public. Mariel Padilla, writing for the 19th, reports, “Corporate America responded on an unprecedented scale.” One-third of Fortune 1000 companies made public statements about the need for racial equity, which is itself unusual for corporate America. Hundreds of companies made financial pledges to support the BLM movement that totaled close to $200 billion, according to McKinsey, to combat systemic inequity and racism in our society. Padilla and the 19th asked, “Where did the money go?” and did women-led companies perform any differently in the actual payout of financial commitments to the BLM movement? This is what they found.

The data is too incomplete to be able to say that women-led companies are walking their talk on paying out their pledges to the BLM movement at a rate higher than companies led by men, but a new Fortune initiative that ranks companies based on fourteen diversity, equity, and inclusion (DEI) metrics found that five women-led companies were ranked in the top twenty for DEI performance. This is a significantly higher proportion (25 percent) of women-led companies, which represents only 8 percent of the Fortune 500. This bodes well for women-led companies, according to new research showing that companies dedicated to social goals have a better financial performance.

Padilla shares three actions that companies can take to move beyond just making performative statements (statements that acknowledge inequity but take no substantive actions to address the cause of the inequity):

It is important for us as consumers, investors, and stakeholders to hold companies accountable for living up to the promises they make about addressing social issues. Otherwise, they may be all talk and no action.

Photo courtesy of Palácio do Planalto (CC BY 2.0)