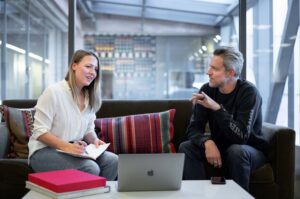 New research from Harvard Business School (HBS) professor Julian Zlatev and colleagues on women and salary negotiation reveals surprising results. I used to always advise my women coaching clients to negotiate for raises or promotions by having an outside offer in place to strengthen their negotiating position and to give them confidence to negotiate assertively. While this makes sense to me intuitively, this research now proves me (and many others) wrong. This new HBS research finds that the more empowered women feel at the negotiation table, the more likely they are to reach a worse deal or no deal at all. Kristen Senz, writing about this study, notes that the results held regardless of whether their negotiation partner was a man or woman. In fact, Senz reports that “when a woman with a strong outside option, such as a job offer from another company, is negotiating, the likelihood that the discussion will end in an impasse nearly triples.” Clearly, this research reinforces that women are still in a lose-lose position when negotiating.

This study, conducted by Zlatev of HBS, Jennifer Dannals of Dartmouth College’s Tuck School of Business, Nir Halevy, and Margaret Neale, both of Stanford University’s Graduate School of Business, analyzed data from 2,552 MBA students and executives from five continents who took part in virtual and in-person classroom exercises in negotiation. In this study, 35 percent of the participants were women and 19 percent were senior executives. Senz reports, “Members of the group negotiated in groups of two: 43 percent of the pairs included a woman and a man, 43 percent were only men, and 14 percent were only women.”

In addition to the finding previously mentioned that the more empowered women feel at the negotiation table, the more likely they are to reach a worse deal or no deal at all, Senz reports that the study found

The researchers suggest that this lose-lose situation for women contributes to the dearth of women in the C-suite and the gender pay gap. For change to happen, organizations need to “reimagine their negotiation process,” says Zlatev. By this he means taking steps such as eliminating salary negotiations from the hiring process. Some companies, such as Reddit, have implemented this change, which makes certain elements of a compensation package, such as salary, non-negotiable. It seems clear that unless companies establish structural changes such as eliminating salary negotiations from the hiring and promotion processes, women are going to remain in this lose-lose situation.