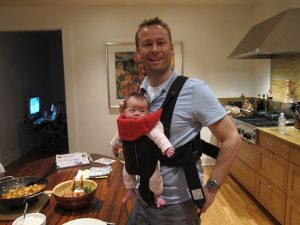 The issue of paid family leave has recently resurfaced as a topic of debate in the United States because we are the only wealthy Western country that does not provide it. I have written in previous posts about the possible reasons why it has not been made available in the United States and why paid parental leave is a policy that would benefit both mothers and fathers. Still, the focus in public debate remains on paid leave, and parenting, as a women’s issue, is a private matter not of concern in the public realm even with evidence to the contrary revealed during the COVID-19 pandemic.

In an article by Darby Saxbe and Sofia Cardenas, published in the New York Times, a number of new studies, including their own, show the benefits for men and families of paid paternity leave. Saxbe and Cardenas conducted research at the University of Southern California (USC) and found that among six thousand couples followed from when their child was a baby until kindergarten age, even when the father took only a week or two of paternity leave, 26 percent of couples were more likely to stay married compared with ones where the father took no leave. Another study from USC found that when fathers took paternity leave, children reported closer relationships with their dads nine years later.

Saxbe and Cardenas note that several new studies show that parenting transforms men’s brains and bodies in ways that might improve relationships:

Spain—A recent study of Spanish fathers found changes in their brains after the birth of a child that predicted stronger responses to infant images.

Holland—A Dutch study found that fathers randomized to wear a soft baby carrier for three weeks showed development in the “fathering brain” as stronger responses to infant cries in the amygdala.

The authors conclude that “time with infants is a key ingredient in building the fathering brain. In other words, policies that support fathers’ time at home after birth may help mold men into more attuned fathers.”

Paternity leave benefits mothers in many ways too:

Saxbe and Cardenas point out that 186 other countries offer paid family leave and 70 percent of adults in the United States support passing legislation to create paid family leave. This policy would benefit everyone, not just women.

US Secretary of Transportation Pete Buttigieg took four weeks of paid family leave this year when he and his husband adopted newborn twins. Buttigieg has talked about the importance of taking this time off to relieve stress on his partner and to allow the two fathers to share parenting and bond with their children. The authors note, “As a high-profile leader who is unapologetically taking time off to care for his family, Mr. Buttigieg may be the father figure we all need.”

Jessica Grose writes that if it is up to the private sector, the majority of parents in the United States will never have access to paid family leave. This is not a “woman’s issue.” She suggests, “We need more fathers—and men in general—to be vocal” about the need for legislation to make paid family leave a reality. There may never be a better time than right now for men to step forward and speak out.