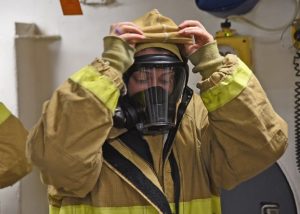 It has been about twenty years since the Los Angeles Fire Department upgraded their fire stations to add women’s locker rooms and restrooms. These changes were intended to reflect a commitment to create an inclusive environment for women to join the LAFD, where they could realize their dreams and add their talents and passions to community service as firefighters. Libby Denkmann, writing for the 19th, reports that twenty years later, female LAFD firefighters still face

Unfortunately, reports Denkmann, who interviewed more than twenty sources, speaking out or filing a complaint is rare for women and other minorities because of intimidation and retaliation while “institutions meant to protect them generally look the other way or enable the misconduct.” Denkmann points out that all of this is happening in a highly political context in Los Angeles where “the firefighters’ union remains a key endorsement for local and national politicians, and firefighters enjoy a heroic status in the public’s imagination, which critics say protects the department from lasting consequences.”

The low representation of women in the LAFD is similar to low numbers nationally:

The numbers for female fire service personnel are quite weak overall, especially when compared to the representation of women in the police and military services:

The stories of harassment relayed to the author by the women she interviewed in Los Angeles were disgusting and outrageously abusive. The types of behaviors described were common in many professions in the 1970s and 1980s when women entered a range of male-dominated professions for the first time, but these behaviors have been largely extinguished as organizations took serious steps to create harassment-free workplaces. We know it can be done but not until leaders make a commitment to change the cultures of their organizations and professions and hold violators accountable. These women in the LAFD passed every test and are able to do everything the men can do physically, but pressure to accept women is usually met with arguments that to do so would “lower their standards.” As one female firefighters noted, “They don’t need to lower their standards. They just need to lower the abuse.”