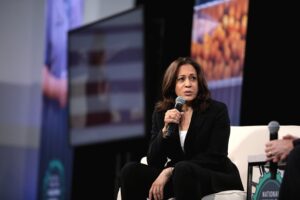 As soon as Kamala Harris was named as Joe Biden’s running mate, “a steady drip of racism and sexism” was unleashed, writes Maggie Astor of the New York Times.

Many of the racist and sexist tropes thrown at her are similar to those aimed at Michelle Obama when she stepped onto the public stage as Barack’s spouse, such as calling her an “angry Black woman” when she spoke of her convictions or showed herself to be a strong woman. At the same time, the intersection of Harris’s particular combination of identities creates some different challenges for Harris. Astor explains that intersectionality is a term coined by Kimberlé Crenshaw, a lawyer and civil rights activist, three decades ago to describe “how various identities can overlap to produce discrimination more complex than just, for instance, racism plus sexism.” Harris has the “triple whammy” of at least three primary identities—race, gender, and being the child of immigrants.

Astor notes that Kamala Harris is a Black woman, an Indian American woman, and a woman whose parents were immigrants. Astor quotes Nadia E. Brown, an associate professor of political science and African American studies at Purdue University, as saying, “These are distinctly misogynoir tactics” when describing the combination of racism and sexism that Harris faces as a Black woman. Here are some examples of misogynoir stereotypes and labels that Harris has experienced so far:

Much has been written about the double binds that women face, and women of color are often judged even more harshly than white women when facing double binds. Astor notes some examples of double binds that Harris faced after the vice presidential debate:

We must all be vigilant and call out these triple whammies and double binds as unfair when we see them leveled against Kamala Harris. This includes staying conscious about our own biases and challenging ourselves when racist or sexist thoughts or judgments arise in us. They are unfair.