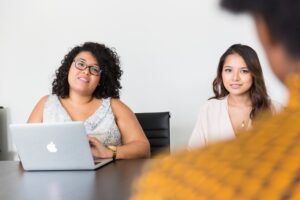 Recent events in the United States have raised the awareness in many white people about the terrible costs of structural racism for people of color in our country in terms of safety, education, access to opportunity, and the wealth gap. In a previous post I wrote about research on the increase in Black infant and maternal mortality in the United States due to the stress of racism. New research conducted by Dnika J. Travis and Jennifer Thorpe-Moscon, published by Catalyst, demonstrates what they call the “Emotional Tax” paid by women and men of color in the workplace. They note that the cost of the Emotional Tax for both individuals and organizations is high. They offer strategies for reducing and eliminating these costs.

What is the Emotional Tax at work? To describe the Emotional Tax, the authors ask readers to imagine feeling a need to be constantly on guard at work to protect themselves against large and small acts of bias, exclusion, unfair treatment, and feeling different from peers at work because of gender, race, or ethnicity. This constant need to be vigilant to protect against what others might say or do, whether they intend to exclude or insult, has a cost. The authors explain that “a lifetime of being marginalized can have uniquely potent effects, including on health and well-being.” The Emotional Tax is also harmful to organizations because the tax can prevent employees from being able to thrive at work or can result in a talent drain when employees feel they must leave the organization to protect themselves.

The Catalyst research was based on a survey of 1,569 professionals, 89 percent of whom worked full time, working in corporate and noncorporate organizations in the United States, and was conducted in 2016. Participants were 24 percent Asian, 44 percent Black, 38 percent Latinx, and 6 percent multiracial with an average age thirty-five. They were 51 percent female and 49 percent male with no reporting of nonbinary participants.

Here are some key findings from this study:

Strategies for reducing the consequences of the Emotional Tax for individuals and organizations, suggested by the authors, are as follows:

Strategy 1: Listen—Listen and affirm how employees experience gender, race, and ethnicity in your organization. Encourage dialogue, promote expressions of difference, and be open to being challenged by other perspectives.

Strategy 4: Lead—Ensure leaders and employees are supported and held accountable for inclusive behaviors. Educate and train managers, pay attention to whose voices are being heard, enhance employee skills, and encourage teamwork.

The Catalyst study also found that 90 percent of women and men of color who experience high levels of being on guard report high aspirations to succeed and thrive professionally. The authors suggest, “Any company that doesn’t fully leverage this ambition is vulnerable to a talent drain.” Don’t let this be true for your organization.