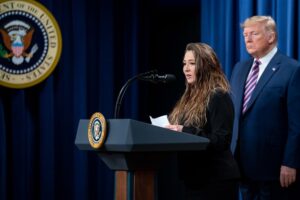 It is always important to verify the truth of claims that our leaders make in order to be informed citizens. The purpose of my posts is to report information from current research to keep readers informed of new knowledge about gender issues in the workplace. While the Trump administration has consistently made claims about their commitment to gender equality, new information reveals a mixed record in that regard. Here are some of the claims from the Trump administration about their accomplishments, reported by Chabeli Carrazana of The 19th:

Let’s take a look at some of the recently available data.

The Gender Pay Gap in the White House

Carrazana of The 19th writes President Trump did not make closing the gender pay gap a priority. An analysis by the staff of The 19th found that a significant gender pay gap exists in the Trump White House with a $33,300 pay gap in median salaries in 2020. Male staffers had a median income of $106,000 while the median of female staffers is $72,700. This means that in the Trump White House women make 69 cents on the male dollar, which is worse than the national pay gap of 82 cents on the dollar.

Carrazan notes that there do not appear to be any staffers who identify as nonbinary, so all available data is binary. These numbers for the White House are calculated as “raw” gender pay gap data, not adjusted for experience, education, title, or other factors, which is the same way that the national figure is calculated.

In comparison to past administrations, Carrazan reports that in the Barack Obama White House, in 2016, women were paid 89 cents on the dollar, which plummeted to 63 cents the first year that Trump took office, according to an analysis by the American Enterprise Institute, a conservative think tank.

As for the claim that the Trump administration has more women in senior positions than any president in history, this claim does not hold up. Carrazan reports that

Actions to Support Women and Girls

In terms of this claim that President Trump took unprecedented actions to support women and girls, Carrazan reports that

We must stay vigilant and ensure that the voices of white women and women and men of color are represented at the table where decisions are made and that we are paid equitably for our work. We bring valuable perspectives and life experience that will make our government and our country stronger.