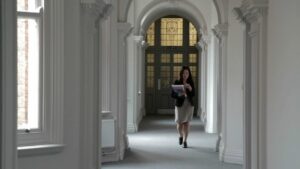 New research from the Eos Foundation’s Women’s Power Gap Initiative reveals a dramatic gender and race wage gap for professionals in higher education. This study examined publicly available information for 2,300 employees regarding the total compensation data of top earners in public institutions and private higher education institutions in 2017. The authors note that the wage gap persists despite the fact that women make up 60 percent of all professionals in higher education and have been earning the majority of master’s and doctoral degrees for decades. Despite these accomplishments, they noticed these alarming facts:

Why is pay parity important, besides the obvious answer that discrimination is unfair? The authors of the Eos study point out that colleges and universities are “role models for our future civic and business leaders, making diversity at the highest levels of leadership paramount.” They go on to state that higher education “could and should be the first to achieve gender parity and fair representation of people of color at the top” because organizations must include diverse perspectives to achieve the best results. They also point out that without equitable representation of women at the highest pay levels, the gender pay gap will never improve. In addition, the expression “you can’t be it if you can’t see it” means that women may not think about being senior leaders if they don’t see a significant number of women in those roles.

The authors offer a number of solutions to the gender and race wage gaps that are useful beyond academia:

The authors note that without transparent disaggregated diversity data at the institutional level and bold annual benchmarks that donors and boards hold institutions accountable for achieving, “we are just tilting at windmills.”