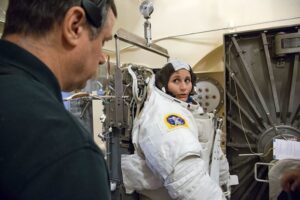 The European Space Agency has set a goal of recruiting more diverse astronauts into its training program. Monika Pronczuk, writing for the New York Times, reports that currently only one woman, Samantha Cristoforetti, is ready to be sent on a mission to the International Space Station. Pronczuk points out that so far, 90 percent of all astronauts have been men, and the European Space Agency has sent only two women into space. The agency plans to recruit both women and people with disabilities to train for space travel.

Why this focus on diversity? Pronczuk quotes Lucy van der Tas, the agency’s head of recruitment, as saying, “You do not need to be a superman or a superwoman” to be an astronaut. In other words, being either a man or fully able bodied is not necessary. Weightlessness in space evens out the playing field for people with disabilities. Van der Tas explains that “when it comes to space travel, everyone is disabled,” and “just technology” will allow a wide range of people to participate.

Recruiting more women has its scientific benefits: according to Van der Tas, “Space affects us very differently, depending on age, gender and ethnicity.” It is time for the industry to have more data and experience with what those differences are to prepare for future space travel. The fact that the European Space Agency is recruiting more women and disabled people to participate in the eighteen-month selection procedure does not mean the criteria for success or the required training period of several years is any less rigorous. To be selected for even the shorter missions to the space station, recruits must

In other words, not many of us would qualify, but for those who dream of space travel, the door is opening for more opportunity.

On a completely different note about another field, doors are also opening to women in the auto trades. One woman, Jessi Combs, provided inspiration to women to pursue their automotive dreams. Before her untimely death in a car crash in 2019 at the age of thirty-nine, her mission in life, described by Mercedes Lilienthal, was to help women follow their dreams in the auto trades. Described as a talented welder, fabricator, off-road racer, and television personality, Combs was a role model for other women who felt empowered to follow her example in the trades. Combs encouraged them to develop a thick skin to deal with the sexism they would inevitably encounter, work hard to master skills, and support each other to develop confidence. Combs’s legacy lives on through the Jessi Combs Foundation, which awards scholarships to women to learn the trades.

Once again, if you can’t see it, you can’t be it. But if you can see women succeeding in nontraditional fields, then anything may be possible for you and the girls and women in your life.