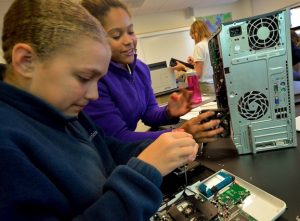 I remember when my high school guidance counselor advised me not to enroll in advanced science and math courses. He told me that girls were just not good at math and science and these courses would be a waste of my time. I kid you not, this really happened. And I believed him and did not consider career paths that required college math and science courses. After I graduated from college, I realized, “Wait a minute! I actually am good in math and science.” In fact, I had taken a number of advanced math and science courses in college for pass/fail grades as elective courses that did not count toward any major. I enjoyed them and did well in them. Once I graduated and realized the discrepancies in my beliefs and experiences, it felt too late to choose a different path, such as medical school, which would require me to start over.

Perhaps this is why a new large study on gender stereotypes in computer and engineering caught my attention. This study, published in the Proceedings of the National Academy of Sciences of the United States of America on November 30, 2021, is authored by Allison Master, Andrew N. Meltzoff, and Sapna Cheryan from the Universities of Houston and Washington. The research reports the combined results of four studies that encompass “a large and socioeconomically diverse sample, across multiple racial/ethnic and gender intersections” from age six through adolescence, from first grade through twelfth. The four studies include large cross-sectional surveys in schools and controlled laboratory experiments to “investigate the presence, correlates, and causal effects of gender-interest stereotypes on interest and participation in computer science and engineering activities and classes.”

The combined findings from four studies demonstrate that gender-interest stereotypes

The real-world implications of gender disparities in computer science and engineering are numerous and contribute to many societal inequities:

The authors close by noting, “Initial choices to forsake STEM may compound over time and develop into larger disparities in course enrollment, choice of major, and choice of career.” This certainly happened to me. They suggest that “addressing these societal gender-interest stereotypes before they take root in the minds of young children may help remedy disparities and improve educational equity.”

We need to instill a sense of curiosity and belonging to all genders in all fields of study, especially when they are younger.

Photo courtesy of Germanna (CC BY 2.0)