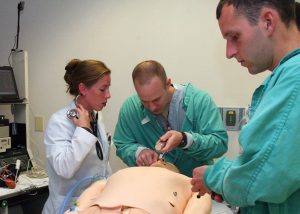 New data from the largest analysis to date on physician salaries shows that over the course of a career, female physicians make an average $2 million less than their male counterparts, a 25 percent pay gap. This survey of more than eighty thousand physicians, reported by Azeen Ghorayshi of the New York Times and published in Health Affairs, is the first to estimate the cumulative impact of gender pay gaps in medicine. Survey data was collected between 2014 and 2019. The study’s lead author, Christopher Whaley, a health economist at the nonpartisan think tank RAND Corporation, suggests that the gap may be even wider now given that other studies show the pandemic has driven women in many fields out of the workplace.

The self-reported salary data was collected at the social network Doximity, which is similar to LinkedIn and claims to reach 80 percent of doctors in the United States. The analysis compared wages between women and men with the same amount of experience and controlled for differences in specialty, type of practice, and patient volume. The study did not include data on people who identify as nonbinary or transgender, which are factors known to influence physician pay. Racial disaggregation of the data was also not possible because, as noted by Whaley, salary information for physicians by race “is not systematically recorded really anywhere.”

The study findings, as reported by Ghorayshi, include the following sober statistics:

Ghorayshi notes that other studies have shown widespread bias against women in both academic and applied medicine, as well as in other fields. She writes that while “almost all professions still pay women less . . . the gap is wider among health care practitioners than among people in computer and engineering jobs.”

According to Ghorayshi, “While roughly the same number of women graduate from medical school as men, women make up only 36 percent of working physicians.” Snigdha Jain, a pulmonary and critical care physician at the Yale School of Medicine, suggests that one source of the “leaky pipeline” might be that women are in the prime of their reproductive years when they start practice, and they experience “insufficient maternity leave, inadequate support on return to work and a disproportionate burden of child care in the subsequent years.” Per Whaley’s suggestion, “Offering more paid family leave and more flexible scheduling,” along with making salary information more transparent, could help women “earn their fair share.”

All women in all professions would benefit from these policy changes. We need to put pressure on our lawmakers to put these policies in place.