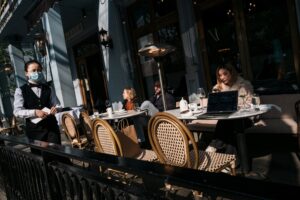 A long time ago I worked as a bookkeeper for several small restaurants. As I prepared payroll checks, I often wondered why servers were paid less than the minimum wage—a lot less. The current hourly wage is still very low: $2.13 per hour for restaurant servers. I never heard or read an explanation for this low wage until now. A recent article by Michelle Alexander entitled “Tipping Is a Legacy of Slavery,” really opened my eyes. She explains that she came to understand the history of tipping in the United States when she read a book by Saru Jayaraman entitled Forked: A New Standard for American Dining.

Alexander notes that “after the Civil War, white business owners, still eager to find ways to steal Black labor, created the idea that tips would replace wages.” While tipping originated in Europe as a way for aristocrats to show favor to servants as bonuses, restaurant owners in the United States mutated the idea into a way to limit pay for Black workers by defining tips as the only source of income. The Pullman Company tried to get away with this to underpay train porters who were predominantly Black, but the porters formed a union and eventually got higher pay. Restaurant workers, mostly women and disproportionately Black, were not able to unionize. In fact, Alexander explains, when the Roosevelt administration signed the first minimum wage law in 1938, it excluded restaurant workers. It was not until 1966 that a subminimum wage was formally created for tipped workers, locking the tipped workforce, which is 70 percent female and disproportionately Black and brown women, into a subminimum wage, currently $2.13 per hour. Alexander points out that the subminimum wage “continues to perpetuate both race and gender inequity today,” which has been made even worse by the pandemic. Specifically, Alexander points out that

The pandemic and a new president of the United States have created an opportunity to fix this egregious legacy of slavery with new minimum wage legislation, the Raise the Wage Act. This legislation will raise the minimum wage overall and fully phase out the subminimum wage for tipped workers. The restaurant industry pays millions of dollars a year to fight pay raises, but it is time that tipped workers were paid a full and fair living wage. Let’s all encourage our congressional representatives to support the Raise the Wage Act.

Photo by Danny Kang on Unsplash