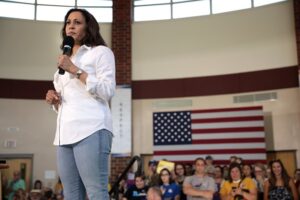 I don’t know about you, but I really hate being interrupted. I don’t like it when either women or men interrupt me, but men interrupt me so much more often, especially in professional settings, than women do. Research shows that it is not just my imagination. In a previous post, I wrote about research showing that women do, in fact, get interrupted more. I was surprised to see, when I located this previous article, written in 2017, that the picture at the opening of the article was of Kamala Harris with reference to the interruptions both she and Elizabeth Warren had experienced in the Senate. Now Kamala Harris is front and center again in a current conversation about men interrupting women, with the added awareness that women of color get interrupted even more often than do white women.

Colleen Flaherty, writing for Inside Higher Education, notes, “Female academics saw their own experiences in the vice presidential debate’s gendered and racialized dynamics” when Mike Pence repeatedly interrupted Harris and refused to stop talking when moderator Susan Page called time. Flaherty notes that Page signaled to Harris to stop talking thirteen times, but she had to signal to Pence forty-five times.

Another important dynamic on display during the vice presidential debates was a racial dynamic. Flaherty cites Anne Charity-Hudley, North Hall Endowed Chair in the Linguistics of African America at the University of California, Santa Barbara, as saying, “This is the story of Black women” when noting that the moderator, a white woman, admitted she gave Pence more time to talk and did not offer equal time to Harris. It is true that Pence took the extra time while talking over Page. Nonetheless, Charity-Hudley explained, this was a typical example of anti-Blackness when white women are the arbiters of rules that benefit white men and short change Black women—not uncommon in academia and other organizations. Charity-Hudley notes that a white ally would have advocated for Harris to finish speaking when interrupted and would have ensured, as the arbiter of the debate rules, that Harris got equal time to make her points when Pence took more than his share of time. But Page did not do that for Harris. This is how white women, of which I am one, collude in reinforcing the racial hierarchy at work in our society. We can do better than this. We can be better allies.