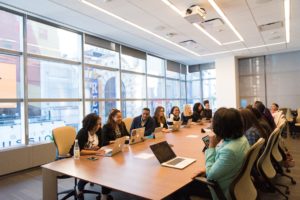 I recently had the opportunity to make a presentation to a group of senior women leaders and was reminded of the value of sitting together to review what we know about gender dynamics in organizations that create headwinds for women trying to succeed. Each of the items listed below is important in its own right, but looking at them together had a powerful impact on the women in my session, who said things like “It’s good to be reminded that it’s not just me having these experiences, and I’m not crazy.” Of course, more than then gender dynamics that we know about through scholarly research on this topic exist, but these ten stand out to me. I offer them here, along with links to their sources, for the reflection of my readers:

We can change how women are treated at work, but only when we are aware of the systemic problems. Talking about these points and more with other women is the first step.

Abundant research shows that women really do get interrupted more and men really do talk more in the workplace. In a previous post, I summarized several studies reporting relevant research findings. In a new, more personal report in the New York Times, Thomas Page McBee, a transgender man, provides a unique opportunity to learn from his experience. He describes how the dynamics began to change dramatically for him at work. He transitioned from female to male, and his voice deepened from testosterone treatments. McBee began his transition to male at the age of thirty-one and moved to a new city and job at about the same time. He explains that his mother, a scientist and executive at General Electric, talked frequently with him and his sister as they were growing up about the challenges she faced as a professional woman. While still living in a female body as an adult, McBee notes that his high, sharp voice “made me invisible. I was frequently interrupted and talked over, especially by men, especially at work. I had to fight harder to make a point. . . . I was sometimes squeezed into silence.” Soon after he began his transition and testosterone injections, he was startled to discover that a privilege of his male body and deep voice was that he could “silence an entire room just by opening my mouth.” Specifically, McBee reports that

Thinking of his mother, McBee says he started to contemplate the choice he had about the kind of man he wanted to be. He began by “tallying the evidence” of whom he was interrupting (women, by a three-to-one margin), whose emails he responded to quickly (men), and whose opinions he was less likely to push back on (men). McBee reports that after asking for feedback, he made the following changes: McBee closes his article by reflecting on the value of both his old and new gender cultures; his goal is to keep the best of both. Which of McBee’s practices are used in your organization? What else does your organization do to support women?   Photo courtesy of mconnors.]]>

When President Trump and Melania Trump visited France this July,  President Trump’s first action was to look First Lady of France Brigitte Macron up and down and pronounce her to be “fit.” Trump said to her, “You’re in such good shape.” He then turned to the President of France, Emmanuel Macron, and said, “She’s in such good physical shape. Beautiful.” Clearly uncomfortable, Brigitte Macron grabbed Melania’s arm and stepped back away from Trump. This incident was broadcast live around the world. What message does it send when the American President treats the First Lady of France like a sex object? This public example of sexist behavior—disrespectful treatment of women as sex objects—is what keeps the “bro culture” in place in the workplace and in society. Author Dan Lyons of the New York Times, writing about the cultures of many technology startup companies, explains that, “Bro cos. become corporate frat houses, where employees are chosen like pledges, based on ‘culture fit.’ Women get hired, but they rarely get promoted and sometimes complain of being harassed. Minorities and older workers are excluded.” Author Áine Cain of Business Insider agrees that “the resulting ‘bro culture’ tends to prioritize young men over all other employees, creating an environment that’s ripe for toxic behaviors like excessive partying and systemic harassment of colleagues.” Bro culture exists in all sectors and industries in the United States, though, not just in tech startups. In another article, Sam Polk of the New York Times  describes the bro culture in Wall Street firms that results in women being overlooked for a promotion, being ridiculed or ignored in meetings, and generally being treated disrespectfully. There is a close connection between all of Trump’s anti-woman actions:

Many women and men are still wary of working together when their work requires them to have one-on-one meetings or to travel together for business. New research reported by Claire Cain Miller of the New York Times  reveals that almost two-thirds of the 5,282 registered voters surveyed by the New York Times say, “People should take extra caution around members of the opposite sex at work.” Miller notes that these results also partially explain “why women still don’t have the same opportunities as men. . . . They [women] are treated differently.” Like many women, my work sometimes requires that I travel with male colleagues for my business. I currently have wonderful male colleagues with whom I have respectful and trusting relationships. I also have had those other experiences, so I understand the need for caution, especially for younger women. Early in my career in two different contexts, two senior male colleagues who had the power to offer me business opportunities used their power to demand sexual favors. Both were married, older men. They may not have thought of themselves as “demanding favors” and may have thought they were offering me a compliment by propositioning me—but they probably knew they were abusing their positions. Because of their power to cut off my much-needed income, their actions put me in a very difficult position. I did rebuff them both—and they both stopped hiring me. The financial impact was devastating for me. Women and men need to be able to work together, yet Miller describes real reasons to be wary:

The discomfort women and men can experience working together can clearly result in negative impacts on women’s careers: I wrote in a previous article about the “tax” women pay due to fear of sexual assault and sexual harassment. What can organizations do? Miller suggests keeping office doors open for one-on-one meetings, utilizing conference rooms with glass walls, and going for after-work drinks or dinner with multiple coworkers. Communication is key—companies can teach women and men how to have honest conversations about how to work together. Organizations should also have multiple, clear procedures and supports available for employees to use when they feel inappropriate behavior has happened. Often, perpetrators are unaware of the impact their behavior has had, and they need some low-key feedback and counseling to change their behavior. I wish it was not still necessary for women and men to exercise thoughtful caution when working with each other, but it is. We can manage this dynamic and have enjoyable and productive work relationships without penalizing women’s careers. What has worked for you?   Image courtesy of Highways England. CC by 2.0]]>