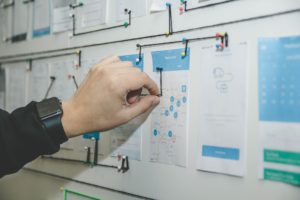 Many best practices exist for creating organizations where women can advance. The ones listed below, from a variety of sources, are current, innovative, and comprehensive ideas that can act as a roadmap for what works:

These best practice ideas are adapted from the following sources:

Photo by Alvaro Reyes on Unsplash

The Army is not making a fuss about it, but this is one of those moments in history that is a big deal: the first eighteen women, out of forty-four accepted for Army infantry training, recently completed the grueling boot camp and graduated. These are the first women to complete infantry training in two hundred years. Dave Philipps of the New York Times writes that the Army is not making a fuss because it has taken great pains to develop “gender-neutral performance standards to ensure that recruits entering the infantry were all treated the same.” Philipps explains that in 2013, the Obama administration ordered the military to open all combat positions to women. Prior to 2015, the Army did not allow women in combat positions. Nonetheless, during the Iraq and Afghanistan wars, women who were not technically in combat roles were forced into firefights while serving in support roles. The Army was able to witness how well women performed in combat with nearly 14,000 women awarded the Combat Action Badge for engaging with the enemy. Because these women were not formally in combat roles, though, they did not receive combat pay, and, Philipps explains, they were “barred from the core combat positions that are the clearest career routes to senior leadership.” Obama opened these opportunities to women, and in 2016 the first class of women entered the Army infantry training program, despite warnings that

These naysayers were wrong. In boot camp, women and men trained together in mixed-gender squads from before dawn to after dark. Some of the original forty-four women who entered the training dropped out, as did some of the men. The standards were the same, and no special treatment was given to anyone. These women worked hard to forge this new pathway for women, and they deserve to be acknowledged for their accomplishment.   Photo by The US Army, CC BY 2.0  ]]>

“I can’t believe I had to learn about these amazing and brilliant women from a movie! Why didn’t we learn about them in school?” lamented an African American friend and colleague. I felt the same way when I saw the movie Hidden Figures, a true story about the African American female mathematicians, scientists, and engineers who worked at NASA in the early days of the space program in the mid-twentieth century. They pushed against humiliations inside and outside their workplace, including racial segregation in their schools, dining rooms, bathrooms, and work spaces. They worked with lesser titles and large pay inequities to perform calculations of orbital trajectories and to solve engineering problems, making space travel possible. Janna Levin, who reviewed the book by Margot Lee Shetterly from which the movie was made, cites Shetterly as saying, “Women . . . had to wield their intellects like a scythe, hacking away against the stubborn underbrush of low expectations” based on gender and race. Their contributions were largely unacknowledged. Why are women’s contributions to science so invisible to most of us? Levin, who is a professor of physics and astronomy at Barnard College, also reviews Dava Sobel’s book about women astronomers at the Harvard College Observatory near the turn of the twentieth century. Another carefully researched true story, The Glass Universe tells the story of women astronomers hired and mentored by Edward Charles Pickering, director of the observatory from 1877 to 1919. Pickering is credited with hiring these women and mentoring the first female PhDs in astronomy at Harvard. Nonetheless, he refused to pay them the equivalent of their male counterparts. Star protégée Williamina Fleming, a single mother, complained to him about her salary—$1,500 per year in contrast to $2,500 per year paid to the men—and he told her “that I received an excellent salary as women’s salaries stand. . . . Does he ever think that I have a home to keep and a family to take care of as well as the men?” Her complaints were ignored. Levin notes that science profited from the women astronomers at the Harvard Observatory, but most of us have never heard their names—Henrietta Swan Leavitt, Williamina Fleming, Annie Jump Cannon, Cecelia Payne, and Antonia Maury are a few. Leavitt’s work, known as Leavitt’s Law, made Edwin Hubble’s development of his telescope possible. Hubble’s name is very familiar to me but not Leavitt’s. The recent death of Dr. Vera Rubin brings another unacknowledged female scientist to our attention. Lisa Randall explains that Vera Rubin made one of the most important advances in physics in the twentieth century when she presented convincing evidence of dark matter. Rubin’s discovery well deserved the Nobel Prize, but her revolutionary insight was never officially acknowledged with a Nobel. Randall, herself a professor of physics at Harvard, explains that “the elephant in the room is gender. Dr. Rubin was not alone in having been overlooked for the Nobel.” Randall goes on to note that “of the 204 Nobel laureates in physics, only two have been women.” Why don’t we learn about the accomplishments of women scientists? The history books don’t mention them, but we can make their names familiar to the people in our lives—our daughters and sons, our granddaughters and grandsons, our students. Let’s make a point of it!   Image courtesy of NASA/GSFC/Debbie Mccallum. CC by 2.0]]>

Women have enrolled in law school in equal numbers with men in the United States for the last twenty years, and minority enrollment has also steadily increased during this period. Recent studies, compiled into a series of articles by New York Times reporter Elizabeth Olson show both good news and bad news about the current status of women and minorities in law firms. Olson reports good news based on a study by the National Association for Law Placement (NALP). This study shows that women and minorities made small gains in 2016:

James G. Leipold, executive director of the NALP, notes that these averages mask big discrepancies by law firm size and geography, and these small gains reflect an “incredibly slow pace of change [that] continues to be discouraging.” Why is progress so slow? Research on women lawyers probably holds answers for minority lawyers as well. Olson reports on a study showing that female law students are clustered in law schools with lower rankings. Because jobs with higher wages and long-term job security go to graduates of highly ranked, prestigious law schools, Professor Deborah J. Merritt of Moritz College of Law asserts that “women start at a disadvantage.” Olson also says women are “underrepresented in the higher echelons of law, including the ranks of judges, corporate counsel, law school deans and professors.” The access to these highly ranked law schools is not a level playing field, either. As noted earlier, the numbers of women and minorities promoted to partner remain low. Olson reports on another study showing that even when women do make partner at large law firms, there is a pay gap of 44 percent between male and female partners. While there are a variety of possibilities for why this discrepancy exists, two seem most likely: In fact, though, many female partners feel that those credits are awarded arbitrarily, often behind closed doors by all-male management committees, and do not accurately represent women’s contributions. Olson reports on three discrimination lawsuits against three different law firms by three different female partners with such claims. In these cases, the female partners complain of pay cuts, demotions, and terminations, even though they were top earners in their firms. I suggest we watch for the resolution of these gender-bias cases for Kerrie L. Campbell, Traci M. Ribeiro, and Kamee Verdrager. Perhaps these lawsuits will force law firms to change their culture to become more transparent and equitable. Unfortunately, too often it takes a lawsuit to bring about change.     Image courtesy of Rep. Nancy Pelosi.  CC by 2.0.]]>

A new study by LeanIn.Org and McKinsey finds little progress in advancement for women in the largest companies. This study of 132 companies employing 4.6 million people includes a review of the pipeline data of the companies, a survey of HR practices, and surveys of 34,000 employees about attitudes on gender, job satisfaction, ambition, and work-life issues.

First, let’s take a look at key findings from the study:

A Road Map to Gender Equity

The LeanIn.Org/McKinsey report offers a practical road map for how leaders can speed the rate of progress in achieving gender equity and inclusion: Numerous studies show the benefits of gender diversity, but statistics from studies or one-time training sessions won’t bring about change unless the leaders of organizations invest in changing the cultures—including changes in attitudes, awareness of implicit bias, and changes in policies and procedures—of their organizations. The road map above shows the way forward for leaders. What successes have you seen and what worked? Please share your stories.   Photo Credit: Image courtesy of imagerymajestic at FreeDigitalPhotos.net  ]]>

Exciting new research reported in the New York Times from Columbia University and the University of Texas provides much needed evidence that racial and ethnic diversity on teams improves performance. While I have always felt the truth of this finding from my own experiences, it is good to see empirical evidence that supports the practice of inclusion. This new research, added to other studies showing that gender diversity also improves performance, should encourage more intentional inclusion of race and gender diversity on teams and in classrooms. The new study on racial and ethnic diversity was conducted in both the United States and in Singapore. Participants were assigned to either homogeneous or diverse groups to make decisions on the sales value of stocks. To ensure that any differences in outcomes were the results of diversity and not culture or history, diverse groups in the United States included whites, Latinos, and African-Americans. In Singapore, the diverse groups were Chinese, Indian, and Malay. The authors report that the findings were “striking.” The decisions of the diverse groups were 58 percent more accurate, and the more time they spent interacting in diverse groups, the more their performance improved. In contrast, the homogeneous groups in both the United States and in Asia were more likely to copy others and spread mistakes. The authors suggest that the homogeneous groups seemed to “put undue trust in others’ answers, mindlessly imitating them. In diverse groups, across ethnicities and locales. . . . diversity brought cognitive friction that enhanced deliberation.” In other words, the presence of diversity produced better outcomes due to the following:

Studies on gender diversity in teams, reported in an earlier article, found that gender-balanced offices produced 41 percent more revenue than single-sex offices. The factors that might account for higher performance in gender-balanced teams are probably similar to those accounting for higher performance in racially diverse teams: Given these findings, shouldn’t all work teams, leadership teams, and classrooms strive to be intentionally diverse? We can all benefit from diversity.     Image courtesy of Ambro at FreeDigitalPhotos.net]]>