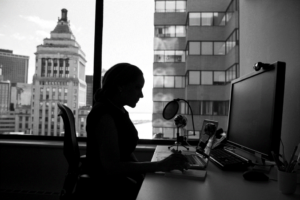 Low-wage workers, particularly those who are not fluent in English, are especially vulnerable to sexual harassment by supervisors. Jeremy C. Fox, of the Boston Globe, writes about four women who were harassed by the same supervisor at the Atlantic Capes Fisheries in Fall River, Massachusetts, where they worked as shellfish packers. More than five years after the harassment began, with the help of the nonprofit Boston-based workers’ rights organization Justice at Work and the Equal Employment Opportunity Commission (EEOC), the four workers were awarded a settlement by US District Court Judge Patti B. Saris. Fox explains that the women were subjected to sexual harassment that “left lasting emotional scars” and affected their marriages. Even though each woman complained to human resources about the harassment while it was occurring, managers did nothing to help them. Fox notes that this case is a sign that the #MeToo movement can extend beyond Hollywood and the executive boardroom into factories. A representative of the EEOC, which filed the federal lawsuit on behalf of the four women, said this case is significant because it shows employees that, “the agency will take them seriously if they come forward.” One of the four women interviewed by Fox explained that she feels a kinship to all the other women and men who “stood up to say, ‘me too.’” I feel proud of them and of myself. . . . I had the courage to lift my voice.” We should all say thank you to these brave women for being our role models.   Photo courtesy of https://www.istockphoto.com/photo/woman-showing-a-note-with-the-text-me-too-gm866106596-143920055?clarity=false (iStock standard license).]]>

I can understand why women want jobs in federal prisons: the prisons are usually located in rural areas where decent-paying jobs are scarce, and they are often the main employer in the area. Caitlin Dickerson of the New York Times explains that few women worked in federal prisons until the 1970s when a series of legal decisions in a changing social environment forced the Bureau of Prisons to allow equal access to jobs. While the prison population is 93 percent male, and male employees vastly outnumber female employees, ten thousand women now make up a third of the bureau’s workforce, holding jobs ranging from secretary to regional director. The problem for women working in the Federal Bureau of Prisons system is that they have never been fully accepted as equals by their male colleagues and supervisors. Long before #MeToo, in 2010, the Equal Employment Opportunity Commission (EEOC) issued a strongly worded report saying that sexual harassment claims were routinely mishandled and retaliation was unusually high for women employed by the Bureau of Prisons. In 2017, the House Oversight Committee opened an investigation and found gross mismanagement of sexual harassment claims and rewards and promotions for staff accused of sexual harassment against female colleagues. While lawsuits have been filed and settled against the bureau, the culture and practices have not changed, and the EEOC has no power to force these changes. Some examples of the abusive workplace environment that women working in prisons must endure include the following:

These working conditions for female employees in federal prisons are outrageous. Clearly there is no motivation or will in the leadership of the Federal Bureau of Prisons to change this culture. Perhaps the wave of women newly elected to Congress will decide to put focus and pressure on the bureau to finally change the culture and treat women fairly and respectfully. Let’s all raise this issue with our new congresswomen and see if something can be done to change this situation.   Photo courtesy of VisualHunt (CC0 1.0)]]>

Women have always wanted access to blue-collar jobs but have not always been able to get it. As Susan Chira, writing for the New York Times, notes, blue-collar jobs generally pay higher wages and have been a pathway to the middle class. Women have wanted those higher-paying jobs for the same reasons that men want them—they have families to support, often as single parents. Chira reminds us that women only got access to higher-paying jobs after 1964, when Title VII of the Civil Rights Act forced open certain industries previously closed to women, including work in factories, shipyards, mines, and construction sites. Unfortunately, the sexual harassment that women encountered when they entered these fields still endures today. In a different article, Chira reports that sexual harassment remains endemic in many blue-collar professions because it was woven into the manufacturing sector as it evolved during the industrial revolution. For example, as women came from farms into the textile mills, “men reserved the highest-status, highest-paying jobs” for themselves. Chira explains that sexual harassment reflects male hostility to women who try to take “men’s jobs” because of this original sense of entitlement. Because society continues to see some jobs as for men only, many blue-collar professions remain male dominated, and studies show that “sexual harassment is more regular and severe in traditionally male occupations.” The sexual harassment that women still endure remains dangerous. For example:

In May, 2018, Sabrina Tavernise of the New York Times reported that two high-ranking women in the northern Virginia Fairfax County Fire and Rescue Department filed federal civil rights charges. When they opposed a long pattern of sexual discrimination and harassment in the department, one was denied jobs and a promotion and the other was asked to leave the department. Tavernise reports that “women have sued [this] department six times for sex discrimination since 2005, and in most of those cases either settled or won.” But nothing changed because of a lack of support for change from senior leadership, so the two senior women decided to take their case to the Equal Employment Opportunity Commission at the federal level, so “they can’t ignore us anymore.” Chira writes that, not surprisingly, an analysis of employment from 2000 to 2016 shows female representation in blue-collar industries has shrunk by as much as 10 percent. Tavernise reports that the percentage of female firefighters has dropped from 5.3 percent in 2007 to 3.5 percent in 2017. Tavernise quotes Marc Bendick, an economic researcher who conducted a national study of female firefighters, as saying, “It wasn’t that the women couldn’t do the jobs, or didn’t want the jobs. It was what the departments were doing to them” that pushed them out of the profession. What will finally bring change? Chira cites several scholars who argue that only a fundamental reconstruction of organizations to be less hierarchical and a reexamination of pay scales for men’s and women’s work will result in lasting change. Some small successes among firefighters in Kansas City, Missouri, and female miners in Wyoming occurred when the jobs were redefined away from the traditional hyperbolic masculine image to a more collaborative one, giving hope that we will figure this out one day, if the will is there to do so.   Photo courtesy of Eric Kilby (CC BY-SA 2.0)]]>