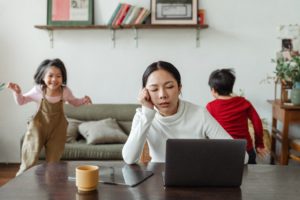 Politicians and employers like to talk about the importance of “family values,” but the pandemic has revealed that families are not really valued at all. Two recent policy decisions in New York City, described by Deb Perelman of the New York Times, offer an example of the complete lack of regard for working families by our nation’s policymakers and employers:

Perelman points out that the clear message here is “you can have a kid or a job. But you can’t have both.” In other words, Perelman states that the economy has declared working parents nonessential. She suggests that the real attitudes about families, deeply embedded in our culture, are that

Allyson Waller writes of a case where a working mother was fired because her young children were making noise during business calls while she was working from home due to the pandemic. Waller cites Joan C. Williams, a law professor at the University of California’s Hastings College of Law, as saying she expects an explosion of cases involving discrimination against mothers. Waller cites research showing that in two-parent households in early April

Because of societal attitudes and the disregard for working families by policymakers, women who are still employed run a high risk of being forced out of the workforce or into part-time jobs with long-term damage to their careers. In a previous blog post I cited the work of Patricia Cohen and Tiffany Hsu explaining that “the impact [for working mothers] could last a lifetime, reducing their earning potential and work opportunities.” Cohen and Hsu point out that reopening will compound the problem when women have to leave the workforce or move to part-time work because of a lack of childcare. They note that women could experience long-term consequences in their careers because of the following:

The authors cite Betsey Stevenson, a professor of economics and public policy at the University of Michigan, as saying, “We could have an entire generation of women” whose careers are damaged.

We need to demand that our leaders and employers do a better job of taking working families, especially working mothers, into account.

Photo by Ketut Subiyanto from Pexels