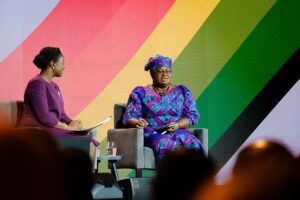 Being the first woman to do something seems to be happening more frequently now across a wide spectrum of roles and industries. It is important to take this moment to notice and mark them. We know there is no guarantee that opportunities will stay open to women unless we stay vigilant. Here are some recent “firsts” for women.

Jane Fraser will become the first woman chief executive of an American megabank, Citigroup, in 2021. Emily Flitter of the New York Times writes that Citigroup is one of the four largest banks in the United States. Fraser has occupied several global senior leadership roles at the bank in recent years. As research has shown, though, women are often given top corporate jobs when an organization is in trouble. Fraser is no exception as she takes over as CEO of Citigroup in the midst of serious regulatory and financial problems at the bank.

Rashida Jones will become the first Black woman to take charge of a major television network, MSNBC. She has held several senior roles and advanced steadily up the ladder at MSNBC. As president of the network, she must now figure out how to retain viewers who found a safe space there for their rage about Donald Trump now that he has left office.

Suzanne Clark became the first woman to lead the US Chamber of Commerce as chief executive. Her appointment became effective in March 2021. Lauren Hirsch explains that the CEO of the Chamber of Commerce is one of the most powerful jobs in business. Clark’s appointment ends a twenty-four-year run by Thomas J. Donohue, who focused his power on backing the Republican Party for much of his tenure. Clark intends to shift the chamber to be an advocate for bipartisan moderation. Previously, in her role as president of the chamber, she helped start the Equality of Opportunity Initiative, which aimed at closing racial wealth gaps.

Dr. Ngozi Okonjo-Iweala became the first woman and first African to serve as director-general of the World Trade Organization (WTO) in March 2021. As Ana Swanson writes, “Dr. Okonjo-Iweala takes the helm of the W.T.O. at a particularly difficult time for the global trade body. . . . It has fallen short on several of [its goals].” Swanson also points out that “the organization’s system for dispute settlement also remains crippled after challenges from the Trump administration.”

Claire Cain Miller reminds us that progress and achievements “can be taken away if we don’t work to sustain it.” She points out that political scientists think representation matters in three main ways:

All the women identified as barrier breakers in this post are facing tough challenges. As previously noted, women are often not elevated to senior position until organizations elevating them face a crisis, which is true for most of the women mentioned here. They are going to need us at their backs.