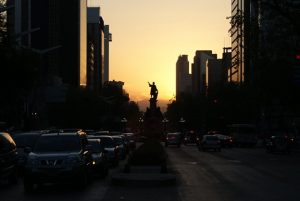 Mexico City’s mayor Claudia Sheinbaum—the first woman ever elected to lead North America’s largest city—made a bold decision to replace a statue of Christopher Columbus, erected in 1877, with one of a precolonial Indigenous woman. Anatoly Kurmanaev and Oscar Lopez, writing for the New York Times, note, “Statues of Columbus are being toppled across the Americas, amid fierce debates over the region’s legacy of European conquest and colonialism.”

Bringing down and replacing the statue of Columbus in the heart of Mexico City has been very contentious because it not only challenges narratives of classism, race, and history in the debate about the legacy of colonialism, but it also injects gender into the debate. The authors cite Mayor Sheinbaum as saying that the new statue “represents the fight of women, particularly the Indigenous ones, in Mexican history.”

One of the legacies of colonialism in Mexico, and in many places in the world, is a male-dominated culture, which often replaced egalitarian and matrilineal cultures. The European colonizers established power structures that allowed only men to vote, own land, control money, own businesses, and lead government. Embedded in these systems of patriarchy is a devaluing of women. But the feminist movement in Mexico has been growing. Kurmanaev and Lopez recount that Mexican women have been increasingly taking to the streets to demand government action against domestic violence, among other issues, pointing out that “at least 10 women and girls were murdered in Mexico on average every day last year, according to official government figures, and most crimes go unpunished.”

Thanks to Mexico’s feminists, in September 2021, Mexico’s Supreme Court decriminalized abortion for the whole country. This is in sharp contrast to the abortion restrictions being imposed in the United States. Mary Beth Sheridan and Alejandra Ibarra Chaoul, writing for the Washington Post, note that “the vote comes as a powerful women’s movement is transforming Mexico. Female politicians now make up half of the National Congress, and an ambitious constitutional reform passed in 2019 aims to ensure gender equality in senior government positions.”

The choice of the statue of an Indigenous woman to replace the one of Columbus embraces important symbolism. Authors Kurmanaev and Lopez explain that the replica of the stone carving the Young Lady of Amajac was discovered in January 2021 and dates to the time of Columbus’s voyages, about 550 years ago. The fact that the decision to replace Columbus with a statue of an Indigenous woman was made by the first woman mayor of Mexico City should also be acknowledged as an important symbol of the difference that women leaders can make.