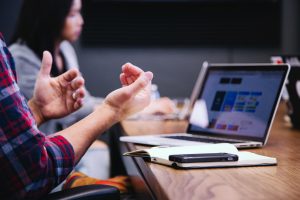 New research conducted and published by Jessica Nordell and Yaryna Serkez measures the impact of the less visible forms of bias that women experience in the workplace “day after day, week after week.” While many studies have been done on individual dimensions of gender bias, such on women being interrupted more in meetings and unfair performance reviews, these researchers wanted to measure the collective impact of the small indignities that women experience daily. The authors developed a computer simulation where they could manipulate and measure different variables to reveal “how large organizational disparities can emerge from many small, even unintentional biases happening frequently over a long period of time.” Here are some of the small biases they considered:

These biases have all been demonstrated in other studies of individual professions. For example,

The authors also examined the differential impact of the intersections of gender with race, religion, ethnicity, sexual orientation, and other dimensions of identity. For example, a Bar Association study found that white women and men of color face similar hurdles to being seen as competent, but women of color face more than either group. Backlash also plays out differently. A survey of hundreds of female scientists by Erika Hall of Emory University found that Asian American women reported the highest amount of backlash for self-promotion and assertive behavior. White women were more penalized for demonstrating dominant behavior than Black women.

The findings from this research are dramatic. The mathematical models that the study developed found that even small increases in gender bias could lead to dramatic underrepresentation of women in leadership over time. For example, even when women and men start out at the same entry level, if a woman’s performance is valued at 3 percent less than a man’s, it will take a woman eight and a half years to reach the seventh level of leadership compared to a man who started at the same time, who will reach the same level in four years. When women’s performance is valued at 5 percent less, only 2 percent of the women who started out at the same level as men make it to the C-suite level.

The authors ask, What is to be done? They note that diversity training is common but may not have much impact. They cite studies that show that after mandatory diversity training, there is either no change in promotions or positive evaluations for women, or there is only a short-term impact that doesn’t last. The authors suggest that what does work is

If leaders don’t seriously commit to these actions, then nothing will change.

Photo by Headway on Unsplash

1 thought on “New Research: The Impact of Everyday Sexism”