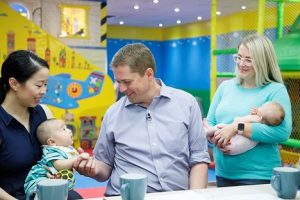 Charlotte Cowles, writing for the New York Times and who is about to take maternity leave as a freelance worker, asks “how to take family leave if you’re a freelance worker.” This question is of particular interest to me as a self-employed worker for more than thirty years (also known as an independent worker, contract worker, or gig worker). Cowles points out that this question is more important than ever because

Cowles points out that freelancing has a lot of advantages, including more flexibility, fewer annoying meetings, and arguably better job security because one is not dependent on one employer for all of one’s income. But the downsides include a lack of employee benefits and job protections. Because I and my spouse are both self-employed, we have struggled over the years to pay 100 percent of expensive healthcare premiums for two people. Because the federal Family and Medical Leave Act does not cover freelance workers, we have lost income and clients when we needed to take care of ill and dying parents.

Do freelance workers have any options? Cowles says yes, but they are limited. It seems that a few states do have some limited family and medical leave insurance policies for freelancers that self-employed people can pay into. The benefits are limited, but it’s better than no benefits at all.

It does seem that support for freelance workers may soon improve, thanks to the pandemic and President Biden’s American Families Plan. Cowles notes that the United States is notoriously at the bottom of the pile as the only industrialized nation in the world that does not have a national program for paid parental leave. While the Biden plan is focused on making paid family leave available to all workers, paid for by tax increases on high earners, it does not specify whether it would cover freelancers. It seems that a door to that possibility may have been opened, however, by the inclusion of freelancers in the federal Pandemic Unemployment Assistance benefits program. Because of this recognition of freelancers as essential workers, it seems possible that independent workers might be eligible for coverage by federal family leave policies in the future. Cowles points out that a 2020 poll by the National Partnership for Women and Families found that 75 percent of voters were in favor of a national paid family and medical leave policy that covers all workers. These numbers include 87 percent of Democrats and 70 percent of Republicans.

Maybe the time has come for self-employed people who contribute so much to the economic well-being of our country have some federal support to deal with life’s challenges.