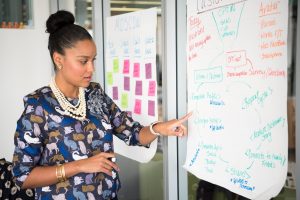 New research published by the Yale School of Management and conducted by Kelly Shue, professor of management at Yale, shows that while women get higher performance ratings than men, they are consistently judged as having less leadership potential by their managers and receive fewer promotions. Shue and her coauthors, Alan Benson of the University of Minnesota and Danielle Li of MIT, studied a large North American retail chain and found that while more than half of the entry-level workers—56 percent—are women, fewer and fewer women hold positions at each level of increasing responsibility:

When the authors studied the assessment and promotion records for nearly thirty thousand workers at the large retail chain, they found that women are 14 percent less likely to be promoted at the company each year because “they are consistently judged as having lower leadership potential than men.” The company uses a two-part annual assessment for (1) for evaluating actual performance and (2) rating leadership potential. While women’s performance at the company is rated 7.3 percent higher than men’s, on average, their potential ratings are 5.8 percent lower. The authors estimate that this lower potential rating could explain up to 50 percent of the gap in promotions.

Previous studies have shown that women are rated higher, in general, on seventeen out of nineteen leadership characteristics, but both the gender pay gap and the dearth of women in senior management positions have not changed despite high ratings. In Shue’s study, she and her colleagues tested whether managers might be correct in assessing women as excellent performers in their current roles but also as lacking the skills to be promoted. Shue explains that to test this possibility, “they identified women and men with similar performance and potential scores for a given evaluation period,” then looked at evaluations for these same employees in the next evaluation period. The women continued to have higher performance scores than men whether they had been promoted or not. In other words, the women who had the higher scores but were not promoted were held to a different standard than the men who were promoted. The authors point out that the ratings on leadership potential are highly subjective, which probably makes them more vulnerable to unconscious bias.

This research also found that as women move up to more senior positions, their potential scores get lower and lower, which eventually shut them out of the most senior roles. It is not a surprise, then, that women end up earning less than men.

What can companies do to create a level playing field? The authors suggest that organizations look for other metrics or methods for forecasting who will be a good manager. It is clear that the current decision-making processes for promotions used by most organizations reflect stereotypes and biases that blind them to the leadership talent that is often right in front of them.