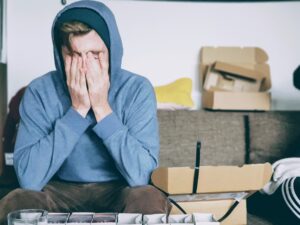 I remember when my brother, who is thirteen years younger than me and the only male child in our family, learned key lessons on how to be masculine. My father bought him a gun when he was about eight and took him hunting to shoot rabbits. My brother did not what to shoot or kill anything, and he cried and protested. My father made him shoot and kill a rabbit by shaming him, calling him a sissy, and saying he would never be his “real son” if he didn’t do it without crying. Real sons don’t cry. I watched my previously sensitive brother shut down and change dramatically as he walled himself off from his emotions to please my father. This transformation was heartbreaking for me to watch.

This not showing emotion or vulnerability may be one of the factors in male burnout, described by Jonathan Malesic, writing for the New York Times. Malesic notes that while much attention has been paid to women’s burnout during the pandemic due to the disproportionate strain of balancing work, housework, and caregiving, not enough attention has been paid to men’s burnout. Men are experiencing burnout in significant numbers, which is contributing to the staff shortages in every industry.

Malesic reports that burnout is defined by researchers as “a syndrome with three dimensions: exhaustion, cynicism and a sense of ineffectiveness.” The author notes that while both women and men experience all three dimensions of burnout, the patterns are different. For example, a large study conducted in 2010 found that women tend to score higher on the exhaustion scale while men score higher on the cynicism scale. Cynicism is also called “emotional distancing.” This sense of hopelessness, exhaustion, and a lack of motivation or the ability to care about one’s job and sometimes about one’s family can be overwhelming.

Malesic points out the different types of factors that may impact men’s burnout:

The author notes that younger men may think this breadwinner ethos is a concept of the past, but they’d be wrong. A study by the Pew Research Center in 2017 reported that

I agree with Malesic when he says that to end our burnout culture for men, we need new ideals about the role of work and values that focus less on economic productivity and more on loyalty, solidarity, and courage—“including the courage to quit a job, raise a child or both.”

Photo by Christian Erfurt on Unsplash