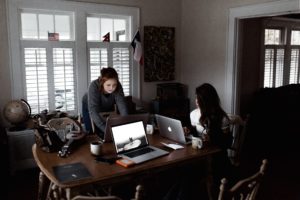 Encouraging new research from Lakshmi Balachandra, assistant professor in entrepreneurship at Babson College near Boston, reported by Janelle Nanos of the Boston Globe, identifies six tips from successful female entrepreneurs. Balachandra notes that after publishing several research reports on how little venture funding women raised between 2012 and 2014—only 183 women’s start-ups out of 6,517 companies received venture funding in that period—she decided to study successful women entrepreneurs. These women were successful despite

Nanos writes that Balachandra’s research on successful entrepreneurs, published in October 2019, included thirty successful female entrepreneurs whose business earned at least $5 million annually (with an average of $43 million a year). Balachandra reports the following sources of success for her sample:

This truly is encouraging research.

Photo by Andrew Neel on Unsplash

I grew up in a family of entrepreneurs where my mother and many of my aunts were strong businesswomen. I am also an entrepreneur, perhaps because I had female role models, and I have always wondered—why don’t more women start businesses? Claire Cain Miller of the New York Times  agrees that something is wrong with the underrepresentation of female business founders. She notes that while women make up half the workforce and earn 40–50 percent of the degrees in business, science, and engineering, fewer than 10 percent of technology startups are founded by women, and only 36 percent of all US companies are owned by women. Also, many woman-owned businesses are small, employ only the founder, and earn less revenue than businesses founded by men, according to the census data. Why are there fewer women entrepreneurs? Miller cites research reflecting the following factors:

Another disturbing roadblock is that women can experience sexual harassment by venture capitalists, especially when women are raising funds for technology startups. The massive imbalance of power between women and men controlling venture capital funds means that women are often propositioned or inappropriately touched as a condition of receiving funding, jobs, or other help that they need to start businesses. They often do not receive the funding when they rebuff the sexual advance. What difference do women entrepreneurs and investors make for women and for companies? Miller cites research by Linda Bell of Barnard College showing that the gender pay gap shrinks when women are the CEOs of companies, and women are more likely to be promoted when women are the leaders. In another article, Miller  reports that when venture capital firms hire a female investing partner, the financial performance of the venture capital firm improves. While networking groups for women like Astia or women-led investment groups like Broadway Angels can help, women cannot change these lopsided dynamics without male allies fighting alongside them for these changes. Perhaps more men with daughters will be motivated to challenge the status quo. Miller cites a research paper by Gompers and Wang showing that male venture capitalists with daughters show less bias against women in making hiring and funding decisions. We need to tackle this imbalance together with conscious intentionality.   Photo courtesy of Kevin Krejc. CC by 2.0]]>