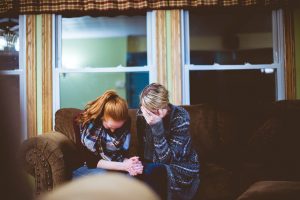 I am the oldest of four children. After my mother gave birth to me and my sister, she had two late-term miscarriages, and I remember her intense sadness and depression after each loss. Even though she went on to deliver two more healthy babies several years later, the sadness never fully lifted for her. Twenty years later, my father asked me to help him help her. We talked with her about the fact that she had never been able to grieve the two lost babies. It was simply taboo at the time for her or anyone else to bring up the topic. She agreed that it might be helpful to her to have a formal acknowledgment of her lost babies. We had a funeral and placed grave markers in our family plot inscribed with their names and birth/death dates. She shared that this ritual did help her a lot.

Because of my mother’s experience, I was drawn to an article by Jennifer Gerson writing for the 19th about new legislation sponsored by Representative Ayanna Pressley and Senator Tammy Duckworth called the Support through Loss Act. Gerson notes that “while pregnancy is typically widely celebrated, those struggling to grow their families typically do so privately out of any combination of grief, stigma or fear of retaliation should their employer find out that they are trying to conceive.” They point out that miscarriage, failed IVF cycles, or unsuccessful adoption or surrogacy plans can be losses that individuals and couples are expected to bear privately, often with the admonition from professionals to “move on” and resume their lives immediately.

Pressley and Duckworth note several reasons why we need to change these dynamics. We need to publicly recognize that family building can involve painful challenges, and employers need to demonstrate compassion and understanding about related grief and loss. The bills’ authors point out that providing paid family leave and support services for grieving families is a critical workers’ rights issue. Workers need protection from fear of retaliation if they access leave and mental health resources when dealing with a loss. Duckworth states that it is “time to recognize the contributions of women in our economy” by providing paid leave and support that, according to Erin Grau, the cofounder and COO of Charter, addresses “the full spectrum of challenges around becoming a parent and being a parent today” in the workplace.

To bring about these changes, the new legislation sponsored by Pressley and Duckworth calls for

Both Pressley and Duckworth became committed to sponsoring this legislation because they and their constituents have experienced loss as aspiring parents. This is an excellent example of the added value that women bring to leadership.

Photo by Ben White on Unsplash

1 thought on “Paid Leave for Miscarriages and Other Family Loss: New Legislation”