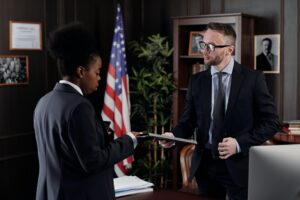 The Roosevelt Institute and John Jay College of Criminal Justice published a new study that reveals important information about the wage gap for highly educated African American women in the workforce. Much has been written about the gender wage gap for women in general in the United States. Michelle Holder, the author of this study and assistant professor of economics at John Jay, points out that corporate profits have increased over the last few decades while wages in general in the United States have stagnated. In 2018, domestic corporate profits totaled $2 trillion while full-time workers’ (median) annual salary sat at $46,800. Holder notes that among the factors contributing to stagnant wages over the past few decades are globalization, technology, and decreasing bargaining power of labor unions.

The author reports that the Institute for Women’s Policy Research found that women in general experienced a gender wage gap in 2018 of 81.6 percent of men’s wages, while Black women working full time earned sixty-one cents for every dollar that white men earned. These simple numbers mask complex factors that play a role, such as occupational crowding based on sex, gender socialization, employer bias, historical exclusionary practices on the part of unions, and the “motherhood penalty.” Holder notes that African American women experience both a gender wage gap and a racial wage gap, which she names the “double gap.” She explains that the impact of the combination of these two types of discrimination on wages are probably not just additive but multiplicative for African American women. The purpose of this research is to quantify the double gap for highly educated African American women.

“African American women have held a uniquely entrenched yet peculiar place in the American labor force,” explains Holder, “since the first enslaved African woman” was brought to the United States to provide involuntary, unpaid labor within and outside of white households. After emancipation, African American women continued to labor as primarily agricultural or domestic workers.  These occupations were the only ones open to them—occupations excluded from President Franklin D. Roosevelt’s New Deal policies establishing Social Security and other benefits for workers.

Holder explains that her research takes an unusual approach and examines occupational wage differentials between African American women and similarly educated white non-Latinx men because non-Latinx men, as a demographic group, possess the best wage-bargaining power with employers. Holder’s research is based on the 2017 American Community Survey (ACS) database with a sample size of over 3 million. This research includes all twenty-two major occupation groups in the 2017 ACS sample and includes only participants who are

The education levels under investigation were probably a minimum of some college and a maximum of graduate level and postdoctoral education. The attainment levels of the Black women were used to establish the boundaries for comparison with the white men. The same attainment levels were then used to match white non-Latinx male workers in matching occupations.

Here are the research’s findings:

In conclusion, Holder states, “The findings from this research suggest that African American women’s labor power is largely undercompensated by employers, with tangible implications for income and asset-building in the Black community—as well as significant cost savings, in the tens of billions of dollars annually, for the private, for-profit sector.” We need government policies that hold companies accountable for these inequities. This is shameful.