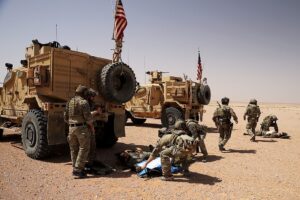 In publishing, Rachel Abrams of the New York Times writes that Hearst Magazines named Samira Nasr as the next editor of Harper’s Bazaar. Abrams notes that Nasr will be the first woman of color to hold the top job at the 153-year-old fashion publication. Abrams also points out that “Ms. Nasr’s appointment . . . comes at a moment of upheaval in the media industry. Journalists, frustrated by some of the coverage of the protests after [George] Floyd’s killing, have been emboldened to question issues of systemic racism and bias in their own institutions.” Staff at a variety of publishing institutions have been protesting discrimination against Black women and other women of color. It seems that the publishing industry is finally listening.

In the military, the first woman has earned the title of Green Beret since the Pentagon opened all combat jobs to women in 2016. The soldier’s name is being withheld because she is now a member of the secretive Special Operations community, and operational security must be maintained. Thomas Gibbons-Neff writes that “the Green Berets were one of the last assignments in the Army without any women.” The crushingly high physical standards of the Green Berets were considered unattainable for women. That barrier has been breached.

Let’s keep an eye out for good news for women, such as the selection of a woman of color as vice president on the Democratic ticket, and share it so that all the bad news currently coming out in our world does not drown out the good.