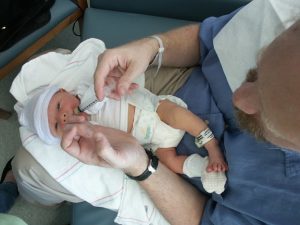 Many men are reluctant to take paternity leave, even when it is available as paid leave, because they fear it will hurt their careers. This reluctance results in an extra burden for working mothers, who often face career-limiting choices regarding balancing careers and parenthood. A new study conducted in Norway, reported by Seema Jayachandran, shows that indeed, men who took paternity leave earned 2 percent less than if they had not. Norway is fertile ground for this type of research because of a major policy change in 1993 that gave fathers of children born after April 1 of that year eligibility for four weeks of use-it-or-lose-it fully paid parental leave. As a result of this new policy, Jayachandran reports that the share of fathers taking leave jumped from 5 percent to 50 percent, giving researchers a large database to use.

Jayachandran reports that a new study by economists on this Norwegian data found that one of the causes of the diminished earnings for men who took paternity leave is that “the short amount of time away from the office gives co-workers a small advantage over leave-takers that shows up in promotions and other workplace advantages.” They were able to discover this finding by comparing cases where all the men’s “competitors,” or male coworkers with a similar education level and age and with children around the same age, went on leave at the same time—then the impact to a man’s career was negligible. However, if a man took leave but his competitors did not, then his earnings suffered. It turns out that men are right about the consequences of taking paternity leave.

What can be done? How can companies correct this negative impact for men so that women’s careers do not suffer when they become parents? Jayachandran suggests that

The bottom line seems to be that it needs to become the norm for men to take paternity leave and that there should not be an economic consequence for doing so. Paying attention to making this change happen will help solve the gender pay gap for women and will increase support for women’s careers if they become mothers. The American Families Plan put forward by President Biden includes twelve weeks of mandated paid parental, family, and personal illness leave, of which paternity leave would be a part. Let’s see what difference this can make.