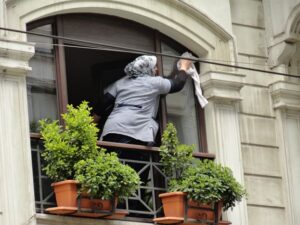 I was very moved when my new neighbors agreed that they would all continue to pay the people who cleaned their apartments, even though the housekeepers could not work in the pandemic. I had just moved to a new city, and the Covid-19 pandemic hit one week after I arrived. Everyone immediately sheltered in place, and people closed their homes to outsiders for protection from the virus—which meant that housekeepers and other service workers were not allowed into our building. I worried about what would happen to all the domestic workers, and I thought their employers continuing to pay them was the right thing to do. How else would these workers pay their bills? In fact, David Segal of the New York Times writes that housekeepers have been among the hardest hit by the pandemic. By April 2020, domestic workers lost most of or all their clients. According to a survey by the National Domestic Workers Alliance,

Segal explains that structural inequality for domestic workers is rooted in racism and existed as far back as the 1800s during the Jim Crow era after slavery. He notes that domestic work was one of the few ways that Black women had to earn money. Until well into the 1950s, most Black women lived in the South and were powerless, exploited, mistreated, and overworked. Segal notes that “in 1935, the federal government all but codified the grim conditions of domestic work with the passage of the Social Security Act” of the New Deal. It provided retirement benefits and a national unemployment compensation program for workers but excluded two categories of employment—domestic work and agricultural labor—that were essential to Black women and men.

Surprisingly, white Southerners weren’t the ones who insisted on this exclusion. White Northerners in Roosevelt’s administration argued that these workers would be too difficult to include. Not until the 1970s was domestic work finally added to the Social Security Act, thanks to the organizing efforts of Black women. But by the 1980s, Black women had moved into other occupations and were largely replaced as domestic workers by undocumented women from Central and South America and the Caribbean who did know their rights or were afraid to assert them.

Senator Kamala Harris has sponsored a federal Domestic Bill of Rights, which would guarantee a minimum wage and other benefits, but it has not yet passed in the Senate. Segal reports that a study by the Economic Policy Institute found that

The pandemic has now magnified the power imbalance between employers and domestic workers. As much as at any time in the past, domestic workers are vulnerable to abuse, poor working conditions, and substandard wages. We can all stand up for these workers by voting for local, state, and federal legislators who will right these wrongs. This is a very old problem.

1 thought on “Domestic Workers in the Pandemic: A Case Study in Structural Inequality”