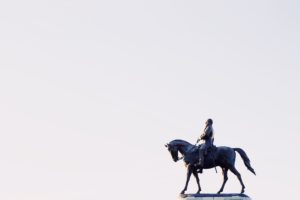 As an adult woman, I am always looking for or tracking whether women are represented in different settings. I look at photos of national and world leaders and count the few faces of women in these groups. I go to art galleries and look for the works by women artists, often searching in vain. I notice lots of statues of military men on horses in public places and rarely see statues of women.

Children also notice the lack of female leaders and role models in public life. Elizabeth Renzetti of the Globe and Mail of Canada writes that after recent losses in national elections, for the first time in many years, Canada currently has no female premiers for any of its provinces. Renzetti cites research by Kate Graham, a political scientist at Western University, involving groups of five-year-old girls. When the girls were shown a group picture of Canada’s current premiers and asked if they noticed anything, they all did. “There’s only one girl,” the children responded. Only one of the premiers was a woman when this research was conducted before the recent election. Now there are none. The children noticed.

Renzetti notes that adults should also be concerned about the absence of women in Canada’s leadership for the following reasons:

On another note, Gail Collins of the New York Times writes that, at last, some statues that honor the accomplishments of women are being created by the City of New York, a city she describes as having a “wildly man-centric population of public monuments.” New York City has commissioned five new statues, one for each borough:

The absence of women in public roles and public spaces sends a strong message to girls that they do not belong. It’s time for us to send a different message.

Photo by Dean Hinnant on Unsplash