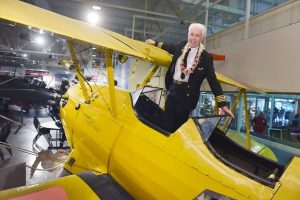 At the age of eighty-two, Wally Funk finally made it into space, the oldest person ever to go on a space flight. She spent sixty years trying to get there. Mary Robinette Kowal, writing for the New York Times, shares that Funk became a pilot at the age of seventeen and found her passion for flying. She dreamed of becoming an astronaut, and at the age of twenty-one she saw an article in Life magazine about a new program starting to train women astronauts. She applied to the program and was accepted. In 1961, she and twelve other women went through the testing program to become astronauts as part of the Woman in Space Program. Kowal explains that the women who passed, which included Funk, did as well or better than their male counterparts. In fact, Funk excelled. None of these women ever made it into space, though. They were blocked because of their gender, and the program was canceled.

Funk spent sixty years trying to become an astronaut: she applied to NASA twice in 1962 and again in 1966. She logged 19,600 hours as a pilot and taught more than three thousand people to fly. NASA did not fly an American woman, Sally Ride, into orbit until 1983.

Mariel Padilla, writing for the 19th, notes that while Funk finally launched into space on July 20, 2021, with Jeff Bezos on his maiden Blue Origin’s space flight, her individual opportunity to realize her dream does not solve the foundational problem for women and nonbinary people of who gets to decide about who gets opportunities. In this case, a wealthy white man, Jeff Bezos, and other wealthy white men, such as Richard Branson of Virgin Galactic, are the gatekeepers making these decisions based on who can pay the most money to them to become space crew. Funk was the exception. Kowal quotes Dr. Lucianne Walkowicz, an astronomer at the Adler Planetarium in Chicago, as saying, “Individual stories and victories are important, but they are not justice.”

Padilla points out that “women are making their marks as engineers, leaders and astronauts. Last year Kathy Leuders became the head of the agency’s [NASA] human spaceflight division, shattering a glass ceiling in the industry.” This is hopeful news, but there is still a long way to go.