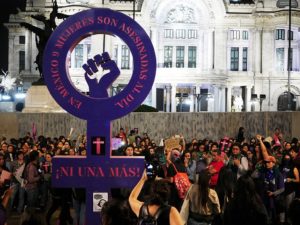 Thousands of women in Mexico are regularly being killed as a result of gender-related violence. Jorge Ramos, writing for the New York Times, reports that women are being pushed to their deaths from the upper floors of buildings, dismembered by boyfriends, skinned and gutted by assailants, or are disappearing and are never found by their families. Because these crimes have been largely ignored and often classified as suicides by law enforcement, women in Mexico are declaring, “Enough is enough,” and designating themselves as empowered feminists. Ramos explains that

Ramos describes the determination and anger of Yesenia Zamudio, a mother whose daughter was murdered, as an example of “the expression of a new culture against silence and machismo taking root in Mexico.” Zamudio has become a public speaker at protest rallies and a leader of the digital organizing, inspired by the global #MeToo movement, that produced a massive countrywide protest on Sunday, March 8, 2020, and a national women’s strike, #UnDiaSinMueres (#OneDayWithoutWomen), on Monday, March 9, 2020. Smaller protests have been going on for months, some of them violent, which Zamudio explains is justified as long as the government does nothing. “We want you [the government] to listen to us,” she explains as the government continues to do nothing to protect women and frustration grows.

Paulina Villegas, reporting on the #UnDiaSinMujeres strike, notes that “many workplaces across the country were devoid of women . . . some schools shut down.” Even some newsrooms, government offices, and subway ticket booths were closed without women to staff them. Overall, businesses and city governments were supportive and declared they would not penalize the women for missing work. Villegas explains that the march on Sunday—by tens of thousands of women—and the massive strike on Monday represent unprecedented collective action.

The women of Mexico are demanding that their president, Andrés Manuel Lopéz Obrador, acknowledge the seriousness of the femicide issue and create a special prosecutor’s office for femicide and cases of disappearance. So far, he has been tone deaf, insensitive, and condescending to the women. Let’s see if these protests and the nationwide strike get his attention. Let’s hope so for the sake of the women of Mexico.