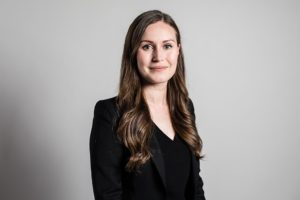 Sanna Marin, age thirty-four of Finland, became the world’s youngest sitting prime minister in December 2019. In addition, four of the five party leaders in this coalition government are women, with Marin as the leader.

Johanna Lemola and Megan Specia, writing for the New York Times, note that Finland has had strong female representation for decades, which has been growing:

In a different article, Megan Specia writes that “Ms. Marin has been a rising star in Finland’s Social Democratic Party since first entering Parliament in 2015.” She served as the minister of transportation and deputy prime minister, stepping in for the previous prime minister when he was ill during a critical time. Specia cites Johanna Kantola, a professor of gender studies at Finland’s Tampere University, as noting that the new government is quite a contrast to the older male-dominated center-right government in power from 2015 to 2019: “It kind of took us back to 1980 in a way . . . they were old white men . . . [and] the kinds of politics that they did. It was a very bad time for gender equality.”

Specia quotes Marin as explaining, “Human rights and equality of people . . . [are] the basis of my moral conception.” Iliana Magra, writing for the New York Times, notes that the new government, led by Marin, has already taken a big step toward tackling gender inequality by abolishing gender-specific benefits and using gender-neutral language in the new legislation that gives the same amount of parental leave to all parents. Specifically, the new reforms

Magra explains that although parental leave reforms have been in the making for a long time, “Ms. Marin may have been key to finally pushing the policy forward.”

These reforms are intended to be an investment by the government in the future of children and the well-being of families. The minister of social affairs and health, Aino-Kaisa Pekonen, notes that “the reform will be a major change in attitudes, as it will improve equality between parents and make the lives of diverse families easier.”

Don’t you wish our government would make an investment like this in us? I do.