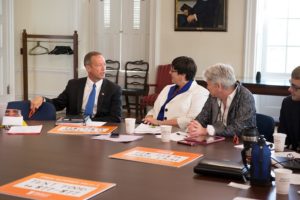 The messages to women about how to advance in organizations still, regrettably, urge women to behave like men, but men don’t seem to get messages that say they need to change at all. Reward systems in organizations still undervalue feminine workplace values and leadership behaviors and predominantly reward masculine ones. For example:

Ruth Whippman, writing for the New York Times, notes that “anything (in most organizational cultures) associated with girls or women . . . is by definition assigned a lower cultural value than things associated with boys or men.” She goes on to say that “the assumption that assertiveness is a more valuable trait than, say, deference is itself the product of a ubiquitous and corrosive gender hierarchy.”

I agree with Whippman that achieving equality in organizations means, in addition to parity in representation, that organizations must come to value both feminine and masculine workplace values. These differences are described by Dr. Joyce K. Fletcher in her book, Disappearing Acts, in the table below:

Fletcher emphasizes that organizations and society need both masculine and feminine values to have healthy and productive environments and relationships. When they are not both valued and our society and workplaces are out of balance, with a higher value placed on the masculine, as they are now, many problems occur for both women and men that could be prevented. For example:

Imagine having organizations where both masculine and feminine workplace values were rewarded and valued for leadership—where leaders could be valued for being both task and relationship focused, both competitive and collaborative, both directive and supportive—where leaders could be role models for how to have both careers and families rather than hiding the fact that they have families. This dream scenario is possible, and having a balance of both feminine and masculine values and behaviors will create more productive, equitable, and inclusive workplaces. We need men to “lean out,” though, rather than blaming the victim and putting all the pressure on women to become more like men. Women and men have to work together to make these changes in organizational cultures. Women can’t change things alone, but the results will be organizational cultures that are better for everyone.

Groundbreaking research by Jack Zenger and Joseph Folkman of the Zenger/Folkman leadership consultancy reported in 2012 found that women were perceived to be stronger leaders than men in twelve out of sixteen leadership competencies. Zenger and Folkman’s original research was conducted using 360-degree feedback reviews for 7,280 leaders in public, private, government, commercial, domestic, and international organizations. They have now updated this study with striking results—women are now rated more highly than men on 360-degree feedback reviews on seventeen out of nineteen leadership capabilities that differentiate excellent leaders from average or poor ones.

The authors note that while for the first time in history several women are running for president of the United States in a major political party, the voters and TV pundits are still asking whether people will vote for a woman for the nation’s highest office. Furthermore, the authors acknowledge that the percentage of women in senior leadership roles in business has remained the same since the original study was done—4.9 percent of Fortune 500 CEOs and 2 percent of S&P 500 CEOs are women. In addition, these numbers have steadily declined globally.

Despite the fact that women consistently prove themselves to be—and are perceived to be—capable leaders, why do so few women hold senior leadership roles? Zenger and Folkman suggest that many factors probably contribute to the small number of women in senior positions, including in the elected role of president of the United States:

Zenger and Folkman report that their updated study shows that women are perceived by their managers—especially male managers—to be more effective leaders at every hierarchical level and in virtually every functional area, including IT, operations, and legal. Women are rated higher in seventeen out of nineteen capabilities with their highest ratings in the following areas:

In conclusion, the authors state that research shows women make highly competent leaders. What’s holding them back is a lack of opportunity driven by old stereotypes and unconscious bias. We have six women who have declared themselves to be 100 percent confident that they can lead our country. Wouldn’t you like your next president to excel in the competencies above? We need to challenge ourselves to push through old stereotypes to hire, promote, and elect women as leaders. Women are more than up to the task of leading.

Tina Brown, of the New York Times, writes that “a new paradigm of female leadership is emerging.” She notes these recent examples:

Brown goes on to note that “women have accumulated rich ways of knowing that until recently were dismissed in male circles of power.” She reflects that as women step into new roles, that wisdom is emerging.

Michelle Cottle cautions us to not buy into stereotypes of women in politics as being more collaborative and less ambitious than men. She cites two resources: one is an article written by Jennifer Lawless, a professor at the University of Virginia and expert on women in politics, and the other is a study from the National Bureau of Economic Research. Both sources do not support the hypothesis that women are more willing to compromise in politics. Cottle notes that while women bring fresh perspectives and different priorities and work styles, it is dangerous to have unrealistic expectations of women. In fact, we sometimes need female leaders who can be tough, unyielding, ambitious, and compassionate, like Nancy Pelosi and Jacinda Ardern, to tackle the complex problems facing our world.

Photo by CoWomen on Unsplash

I remember the 1990s when the Anita Hill-Clarence Thomas Senate confirmation hearings brought the issue of workplace sexual harassment into the light of day and gave the name sexual harassment to a set of behaviors that were previously undiscussable. Sexual harassment is defined as unwanted behaviors of a sexual nature perpetrated by a powerful person (like a boss) against a less powerful person (like an employee) as an abuse of power. In what was the precursor to the #MeToo movement, after Anita Hill’s testimony about Thomas’s behavior toward her as her boss, women began to speak out, name their abusers, and win big lawsuits against the companies that failed to protect them. Men complained that they had to “walk on eggshells” around the office to ensure they were not wrongfully accused of sexual harassment by female colleagues, especially younger female colleagues. They argued that the best way to protect themselves was to stop mentoring younger women altogether. This was BS, of course—but now it is happening again. Katrin Bennhold of the New York Times reports that many high-powered men at the recent World Economics Forum in Davos, Switzerland acknowledged concern about the #MeToo movement which, she explains, “has empowered women to speak up about harassment in the workplace.” As was true in the 1990s, these senior men are deciding to reduce their risk by minimizing contact with female employees, thereby depriving women of mentorship, sponsorship, and valuable exposure to influential networks. Two online surveys conducted in 2018 on the effects of #MeToo in the workplace found the following:

Bennhold cites Pat Milligan, a researcher on female leadership at Mercer, as noting that “if we allow this to happen, it will set us back decades. Women have to be sponsored by leaders, and leaders are still mostly men.” We learned some things in the 1990s about how to reduce the risk men felt when working with women and how men can create respectful work relationships with women, thereby ensuring that they will not be accused of sexual harassment. Here are some examples: Alexandra Robbins of the New York Times notes that redefining masculinity from toxic to productive is being encouraged on college campuses in some fraternities. Productive masculinity is defined as conscious action to disrupt sexism, racism, and homophobia by men confronting disrespectful behavior in other men, which involves having open conversations with other men about masculinity and developing respectful and platonic relationships with women. In their recent ad addressing toxic masculinity, Gillette explains that they hope to influence the next generation of men to show respect, hold each other accountable for bad behavior, and be role models to show the best in men. Jennifer Wright of Harper’s Bazaar notes that the firestorm unleashed by the two-minute Gillette ad, which many people labeled as a “war on men,” shows how far we have to go. Perhaps senior male leaders in companies can learn from younger men on college campuses about productive masculinity and from Gillette about what respect, accountability, and role modeling look like. We really do know how to do this—but powerful men need to be willing to do things differently. Do you see examples of productive masculinity at work? We would love to hear your stories.   Photo courtesy of thetaxhaven (CC BY 2.0)  ]]>