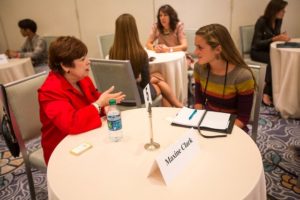 While in my forties, I met a woman, Becky, in her eighties who, like me, had chosen not to have children. I was worried that I would feel lonely in my old age and regret my decision. When I met Becky, I asked her if, now that she was in her eighties, she felt lonely and regretted her decision not to have children. She replied, “I don’t know how I’m going to feel when I’m old, but I’m not lonely yet. The secret is to have younger friends!” That was the most liberating perspective I had ever heard, and I stopped worrying. I have been cultivating, nourishing, and cherishing my friendships with younger women ever since I met Becky, and my life has been enriched in so many ways.

Not surprisingly, I was delighted to read recently of two types of intentional cross-generational groupings gaining momentum in the United States. The first type is intentional cross-generational gatherings in person and online for personal and professional support. The second type is a movement that brings socially active progressive millennials and social activist Roman Catholic nuns together to learn from and nourish each other.

Abby Ellin, writing for the New York Times, reports that intergenerational women’s groups are forming both in-person and online to “share stores, concerns and triumphs” across generations. Meetings take place online and in cities across the country, convened by individuals who recognize a need for personal and professional friendship and support among women. Participants can range from twenty-nine to ninety-three years of age in these meetings, and the topics vary widely:

The author notes that women of all ages can find it difficult to make new friends as adults. The demands of work and family life can leave women feeling socially isolated. She also notes that millennials and boomers who work together often tend to stick with their same-age cohorts outside of the office. That’s why the purpose of these intergenerational groups is not only to exchange information but to create settings where people can discover common interests and cross-generational friendships can form. These friendships are enriching when wisdom and energy are shared in both directions (younger to older and vice versa). Here is a sample of some of these gatherings:

The second type of intergenerational group that recently emerged, called Nuns and Nones, is described by Nellie Bowles in the New York Times. The pilot project, launched by a group of millennials (who are the least religious group of people in America), came about when a group of young social activists, who also describe themselves as spiritual but not religious (Nones), went looking for intentional communities of people living radical activist lives with total devotion to their causes. During their search, one of the millennials, a thirty-two-year-old man named Adam Horowitz, realized that the people already living this way are nuns. A six-month pilot project was launched by Horowitz and a group of progressive millennials with the Catholic Sisters of Mercy in Burlington, California. Bowles quotes one of the Nones, Sarah Jane Bradley, as explaining, “These are radical, badass women who have lived lives devoted to social justice. And we can learn from them.” The group moved into the convent for six months for the pilot project, and Nuns and Nones is now running groups in a dozen cities. In each group, sisters and millennials meet regularly and sometimes live together. Each group benefits in some of the following ways:

These intergenerational relationships are good for everyone. Just ask Becky!