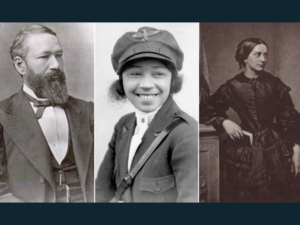 Courage is a rare human quality, and reading about people from the past who had the courage to break through barriers and act on their convictions is uplifting. I share here the stories of four such overlooked people: Bessie Coleman, Ralph Lazo, Clara Schumann, and Homer Plessy.

“Bessie Coleman was the first African-American women to earn a pilot’s license, thrilling crowds by performing dangerous maneuvers,” writes Daniel E. Slotnik of the New York Times. Coleman decided to learn to fly when her brother returned from fighting in World War I. He reported to her that women in France were so liberated, “they could even fly planes,” Slotnik explains. He went on to tell his sister, in 1919, that black “women ain’t never goin’ to fly”—and she decided to prove him wrong.

Unable to find any pilots in the United States to teach her to fly, Coleman decided to go to France. To prepare for the trip, she learned French, raised money, and saved her own earnings from working in a chili restaurant. In 1920, she left for France, enrolled in flight school, and began a seven-month course on flying. She learned aerial maneuvers, and in 1921, she received her pilot’s license, granting her the right to fly anywhere in the world. Slotnik writes that Coleman saw flying as a way to empower black people in America. Her aerial performances dazzled crowds and earned her enough money to buy two planes. She died at the age of thirty-four in a flying accident and was memorialized at her funeral by the journalist Ida B. Wells.

In 1942, after Japan’s attack on Pearl Harbor, the United States government, under President Franklin Roosevelt’s executive order, rounded up and incarcerated 115,000 Japanese Americans living in the West. They were torn from their homes and businesses with no due process and sent to internment camps. Two-thirds of them were United States citizens. Ralph Lazo, a seventeen-year-old Mexican American high school student, decided to go with them to be with his friends.

Veronica Majerol, writing for the New York Times, explains that Lazo presented himself at the Manzanar internment camp, pretending to be Japanese-American so that he could be willingly interned. For two and a half years, he gave up his freedom and lived in the harsh conditions of the camp. Majerol notes that by the time he left Manzanar, Lazo had developed a deep social conscience and a sense of indignity over the treatment of Japanese Americans that shaped the rest of his life. He lived as an activist fighting for education for underprivileged groups and working for reparations for Japanese Americans who had been interned.

I love classical music and know the name of the composer Robert Schumann, one of the nineteenth-century master composers. I was very surprised, though, to read in an article by Thomas May that Schumann’s wife, Clara, was also a composer and celebrity pianist in her time. As often happens with women artists, she does not get the same degree of recognition as her husband even though she was at least as accomplished.

Clara Wieck Schumann was a child prodigy as a piano virtuoso in Germany and toured Paris before her teens. She married Robert Schumann, a student of her father’s, and encouraged his development as an artist. May explains that when they met, Robert was an unknown and insecure composer while Clara had an international reputation. She is now often mentioned only in reference to her husband, although she was rediscovered in recent years by women performers who find inspiration in her work.

I have always heard of Plessy v. Ferguson as a famous Supreme Court case, but I did not fully understand it until reading about Homer Plessy, the plaintiff in this case. Glenn Rifkin, writing for the New York Times, explains that long before Rosa Parks refused to move from her seat in the white-only section of a bus in 1955, Plessey refused to leave the whites-only train car for which he had purchased a ticket in 1892. He was dragged off the train and charged with violating the 1890 Louisiana Separate Care Act, one of the new Jim Crow laws popping up all over the post-Reconstruction South after the Civil War. Rifkin explains that these segregationist laws were developed to institutionalize white supremacy movements intent on quashing “any notion that people of color might ever attain equal status in white America.”

Plessy, a racially mixed shoemaker who could pass for white, was a civil rights activist who volunteered to be a test case for local civil rights groups wanting to get a case to the Supreme Court to try to stop these new laws. The judge in the Plessy case, Judge John Howard Ferguson, upheld the constitutionality of the Louisiana law. The case eventually got to the Supreme Court, where the new law was also upheld as constitutional. Rifkin notes that Plessy v. Ferguson came to define the Jim Crow era as a time when people of color were summarily segregated from most public places for the next fifty-eight years until Brown v. Board of Education was decided in 1954.

Who are your forgotten heroes?